With names like the Rampage, the Retaliator and the Vortex Nitron, it’s no wonder Nerf guns continue to be an in-demand toy for kids of all ages (even the big ones).

With so many families hosting at least one Nerf gun at home, here are 10 fun games you can play together:

Set up some empty cans, bottles or anything else you can summon on a table a few meters away and line up the shooters ready to knock them down. With older kids, you could make up coloured stickers or markers for each target to give them different points and see who can score the highest in each round. Deck two teams out with arm bands or something of the same colour and give them a flag or some kind of treasure that they have to protect. Place the item at opposite ends of the house or the yard and let them go for it. It’s, even more, fun if you can hide the treasure from the opposing team so that not only do they have to find it and capture it without being shot, but they won’t have a clear idea of where to look! Players who are shot can either be sat out, or have to go back to their home base and start again. 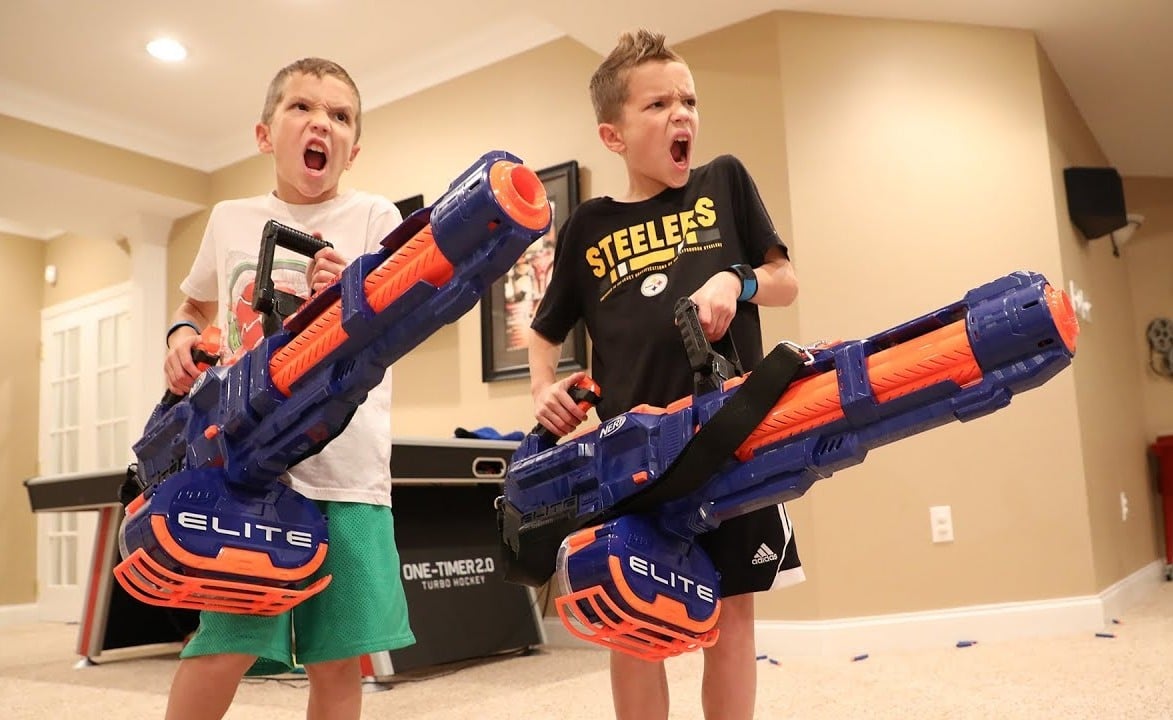 This works on word recognition, aim and fun all at once! You can set this up similar to the tin can challenge, but place sightwords you might be learning in school in front of the targets.  Bonus points for being able to both shoot and say which word you have hit. This is an interesting and engaging way to get the homework done! 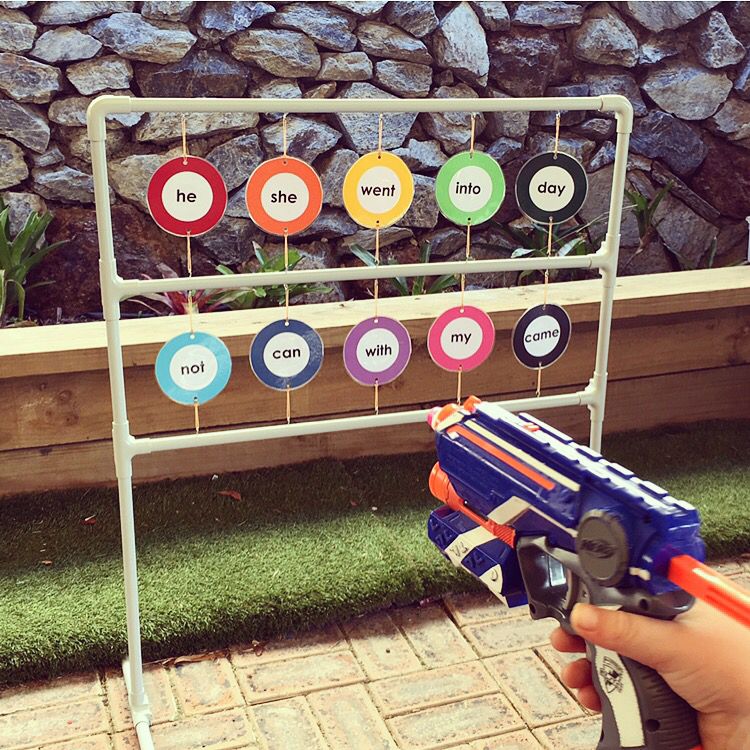 This is played as every-man-for-themselves or in teams and simply involves using the smallest, cheapest guns you can buy. By limiting the firepower to nothing more than a six-shooter, the games last longer and help players to work on stealth, accuracy and skill. One or two players have to protect “The Baby,” which should be a toy baby rather than a live human. The protectors have to provide the baby with safe passage from one point to another while under fire from the assailants, who try to capture the baby by eliminating all of the defenders. If you accidentally shoot the baby, you’re out. Freeze tag is always a fun game but the addition of dart guns make it that much more fun for kids.

You will need at least four players and rather than having a designated shooter, everyone can be armed with a Nerf gun.

If you are hit by another person, you are frozen. This means no moving at all or shooting your gun. To be unfrozen a person must hit you with a dart again. If you are playing teams, you would need your team member to hit you with the dart to be unfrozen. Hold a water balloon off to the side or place it on a table and see who can hit the balloon and break it open. You can try different variations of this depending on how wet you want to get. For older kids, you can toss the water balloon up into the air and have them shoot at it to try and break it open before it hits the ground. 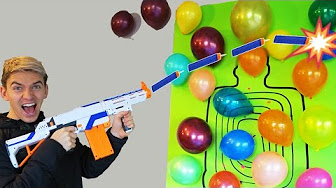 This game is a homage to the old 1980’s TV show and is one of the best two-person games ever. Set up a shooter (the gladiator) on high ground who has access to different weapons along a course and the competitor, who doesn’t have a  weapon, has to navigate an obstacle course while avoiding the Nerf darts.

This is a good game to play when you have an unbalanced playing fieldwhere one side has lots of cover and the other side doesn’t. Players with good positions have 10 lives while those with little cover have 15.

During the game, if you can touch all four corners of your playing area, you can gain 5 extra lives.  If every member of the team reaches all four corners, they win.  You can also win by eliminating the other team completely. 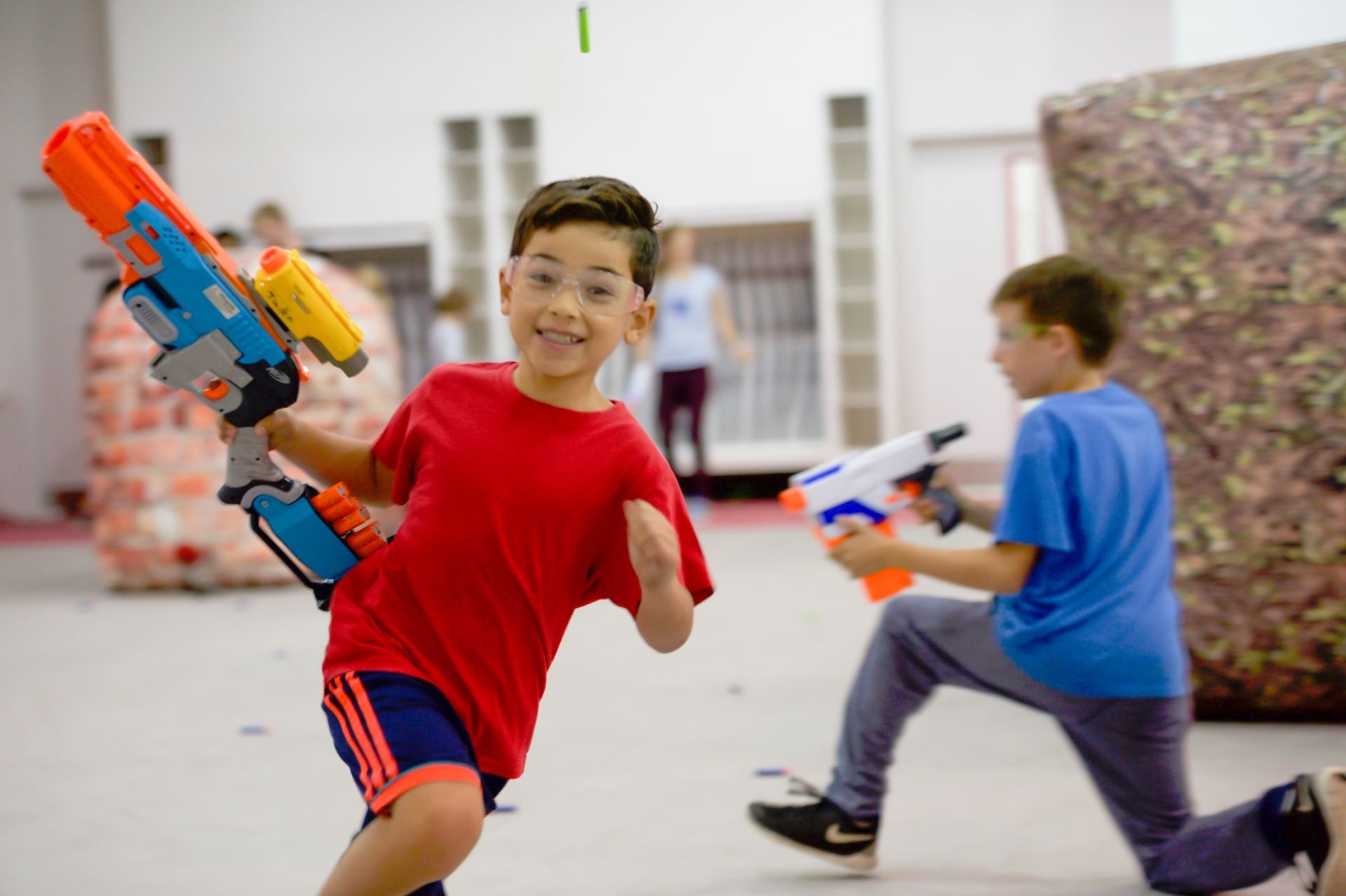 The only goal is to eliminate the competitors on other team and each player has a set number of lives. But this has a twist where if you are hit on a non-critical body part like an arm or leg, it doesn’t count against your total lives. Instead, you can no longer use that limb.

If you’re wounded, you can be fixed by visiting a field hospital on the playfield. While players are in the hospital, they can’t be shot or do any shooting, but once they leave, they are fair game. The ‘Cinderella Effect’: Why Step-Parents Kill Their Partner’s Kids

What Does Being Australian Mean To You?