As of June 28, 2022, the severe acute respiratory syndrome coronavirus 2 (SARS-CoV-2), the virus responsible for the coronavirus disease 2019 (COVID-19), has infected over 545 million people and caused over 6.3 million deaths globally.

SARS-CoV-2 shares sequence homologies with immunodominant epitopes located on the spike protein of several other human coronaviruses (HCoVs). More specifically, the SARS-CoV-2 S2 subunit exhibits a greater level of sequence homology to HCoV strains as compared to the S1 subunit.

Individuals who experience symptomatic COVID-19 often produce a diverse set of SARS-CoV-2 antibodies whose robustness is directly correlated to disease severity. Previous studies have also suggested that the early humoral response to SARS-CoV-2 is mediated by pre-existing OC43-reactive antibodies that have been produced following infection with other HCoVs.

One primary source of pre-existing immunity against newly emerging SARS-CoV-2 variants is antibody cross-reactivity from infection with previous viral strains. This cross-reactive immunity is similar that which might be achieved following immunization against a new SARS-CoV-2 strain against previously circulating strains.

Infants are often provided protection against various infectious diseases through exposure to maternal immunoglobulins (Igs) present within human breast milk. To this end, previous studies have found that anti-SARS-CoV-2 secretory IgA is present within human breast milk both during and after the acute infection and that these antibodies are capable of neutralizing SARS-CoV-2 in vitro.

Furthermore, the breast milk of mothers who receive current messenger ribonucleic acid (mRNA) COVID-19 vaccines also appears to contain high titers of IgA and IgG that are capable of neutralizing SARS-CoV-2. Importantly, the milk of nursing mothers infected with SARS-CoV-2 does not appear to transmit the virus to the breastfeeding infant.

Previous reports have failed to show any protection conferred by pre-pandemic human breast milk samples against the SARS-CoV-2 receptor-binding domain (RBD) present within the spike protein. However, there remains a limited amount of data on whether the breast milk of mothers who have recovered from and/or are vaccinated against COVID-19 contains antibodies that are cross-reactive to other HCoVs.

In a recent Vaccines study, anti-spike and anti-N-terminal domain (N) IgA and IgG in human breast milk and blood were assessed for their activity against SARS-CoV-2 and SARS-CoV-1, as well as four other prevalent HCoVs including 229E, OC43, NL63, and HKU1 after the lactating mothers had been vaccinated against or recovered from COVID-19.

Study cohorts and experimental design. This prospective study consist of two cohorts: (A) The vaccination cohort enrolled lactating parents (n = 30) older than 18 years without COVID-19 infection history and scheduled to receive either the Pfizer-BioNTech/BNT162b2 or Moderna/mRNA-1273 mRNA vaccination. The human milk and fingerstick blood samples were collected before vaccination and 18 days after the first and second doses each. (B) The infection cohort enrolled lactating parents who had received an RT-PCR COVID-19 diagnosis within the previous 14 days. The human milk samples were collected at enrollment day 0, then on days 3, 10, 19, and 28. Fingerstick blood samples were collected on days 0 and 28.

Taken together, 46 lactating mothers who were previously infected with SARS-CoV-2 as confirmed by reverse transcription-polymerase chain reaction (RT-PCR) assay were included in the current study. Milk samples were collected from these mothers on days zero, three, seven, ten, and 28.

In addition, a total of 30 lactating mothers who had received either the Pfizer-BioNTech BNT162b2 or Moderna mRNA-1273 COVID-19 vaccines were included in the current study. Both milk and fingerstick samples were collected from these participants prior to vaccination, as well as 18 days after receipt of both the first and second vaccine doses.

As compared to pre-vaccination levels, IgA and IgG levels against the whole SARS-CoV-2 spike protein, as well as the S1, S2, and RBD subunits were significantly higher 18 days after receipt of the first vaccine dose in both breast milk and blood. In fact, anti-spike IgA and IgG levels increased uniformly by 10- and 100-fold, respectively, after vaccination in breast milk samples. 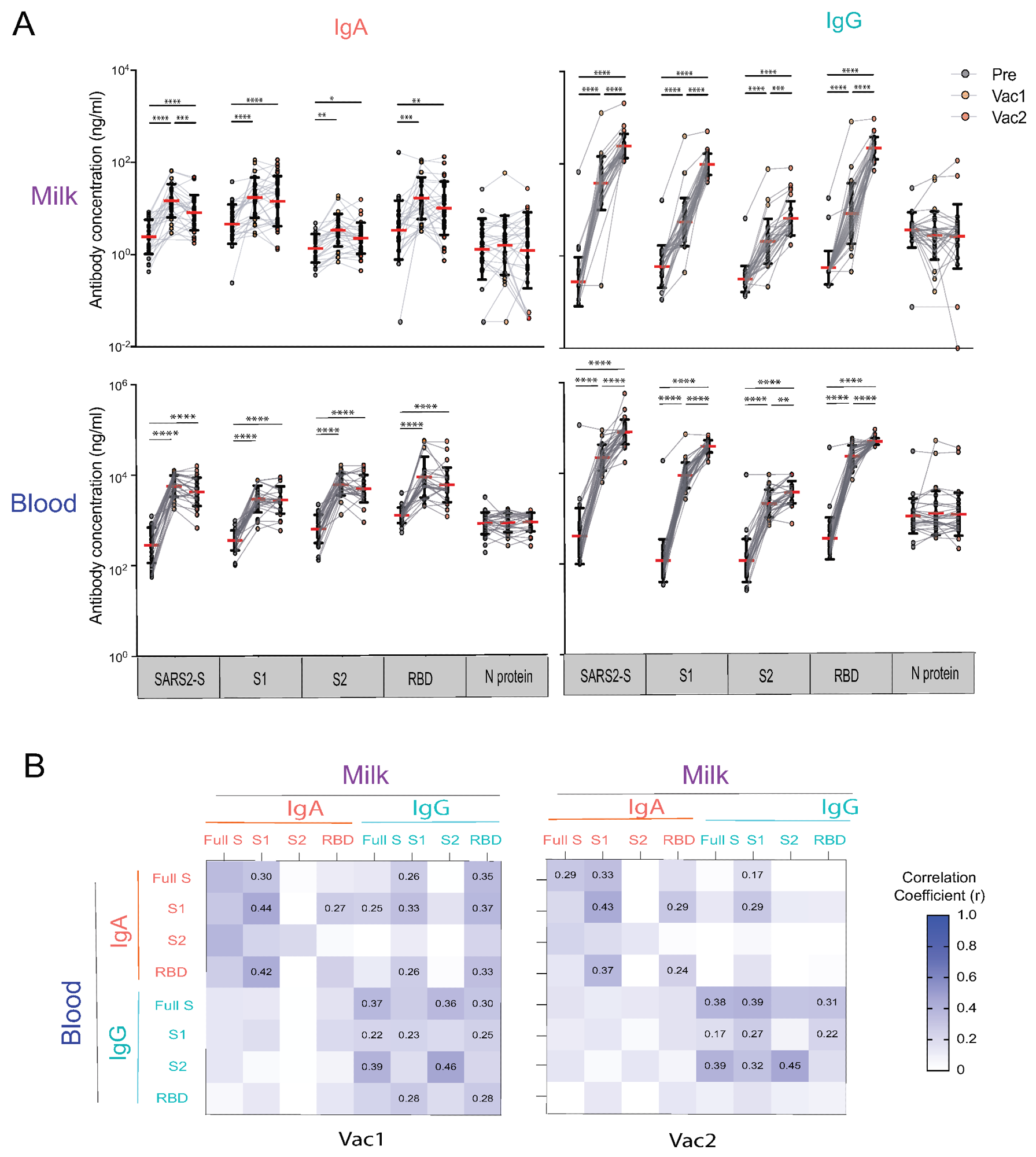 Human milk and blood SARS-CoV-2 specific IgA and IgG antibody response to mRNA vaccination in lactating parents. (A) IgA and IgG antibody responses to SARS-CoV-2 S (SARS2-S), S1, S2, RBD, and N of SARS-CoV-2 elicited by COVID-19 mRNA vaccination. The milk and fingerstick blood samples were collected pre-vaccine (PRE), 18 days after the first dose (Vac1), and 18 days after the second dose (Vac2). Antibody concentrations were estimated using the mPLEX-CoV assay (see Methods). Generalized linear mixed-effects models were used to test for differences between time points (**** p < 0.0001, *** p < 0.001, ** p < 0.01, * p < 0.05). (B) Heatmap of the Spearman correlations between IgA and IgG concentrations against SARS2-S, S1, S2, and RBD in milk and blood. Correlation coefficients (r) are color coded as shown in the figure and numerical values are given when the correlation p-value are less than 0.005.

Both anti-spike IgA in breast milk and blood samples remained the same or decreased after receipt of the second vaccine dose. Comparatively, IgG levels in both breast milk and blood continued to increase beyond the levels observed after receipt of the first vaccine for up to 187 days following the second vaccine dose. Anti-S2 IgG levels were not as high as anti-spike, S1, and RBD IgG levels.

As compared to the anti-spike IgA and IgG levels in lactating mothers pre-vaccination, infected individuals exhibited significantly higher levels of these antibodies. Both anti-N IgA and IgG antibodies were also detected in the breast milk of infected mothers at levels that were consistent throughout the course of their infection.

COVID-19 vaccination also led to a 0.43-6.04-fold rise in IgG antibodies in breast milk against SARS-CoV-1, OC43, HKU1, 229E, and NL63 HCoVs. However, this effect was not replicated in blood samples, where immunization failed to produce IgG against 229E and NL63, both of which are more antigenically diverse α-HCoVs, and instead only produced broad-reactive IgG against OC43 and HKU1.

Cross-reactive binding of both IgA and IgG to the OC43 and HKU1 β-HCoVs spike proteins was broader and stronger in breast milk and blood samples obtained from COVID-19-positive mothers as compared to those produced by vaccination. IgG antibodies produced as a result of SARS-CoV-2 infection within breast milk samples exhibited a wider range of cross-reactivity than breast milk IgA and blood IgG, including reactivity against NL63 and 229E.

The current study is the first to show that broad cross-reactive IgG and IgA antibodies against HCoVs were produced in human breast milk by both COVID-19 mRNA immunization and previous SARS-CoV-2 infection. Overall, the findings demonstrated that, in contrast to the two-dose mRNA vaccination schedule, acute COVID-19 evoked a wider cross-reactive antibody response against HCoV spike proteins.

These findings also demonstrate a strong association between peripheral blood broad post-infection and vaccination anti-spike IgG in breast milk; however, no correlation was observed between milk and blood anti-spike IgA.

The microbiome plays a vital role in a healthy diet

June 14, 2022
Comments Off on The microbiome plays a vital role in a healthy diet

January 23, 2022
Comments Off on Study highlights the neurologic manifestations linked with COVID-19 in hospitalized children

July 27, 2022
Comments Off on Organized sports help kids to develop the “grit” for overcoming challenges as adults

Sleepless nights over her children’s future as debts pile up

August 18, 2022
Comments Off on Sleepless nights over her children’s future as debts pile up February 11, 2022
Comments Off on What parents should know about fentanyl – CHOC

January 25, 2022
Comments Off on Genetic diagnosis in cerebral palsy patients could change the approach to care 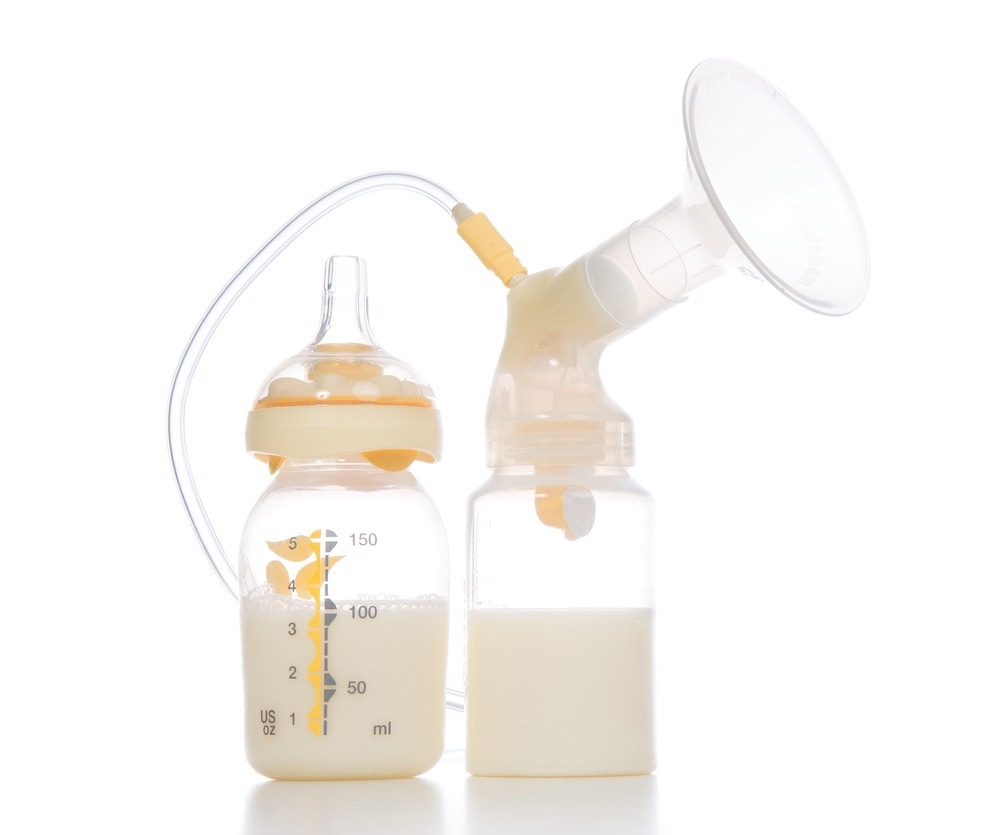 Lipids in breastmilk may protect against metabolic disease later in life

July 14, 2022
Comments Off on Lipids in breastmilk may protect against metabolic disease later in life

March 1, 2022
Comments Off on New CDC reports provide insights on the health and well-being of children during the pandemic 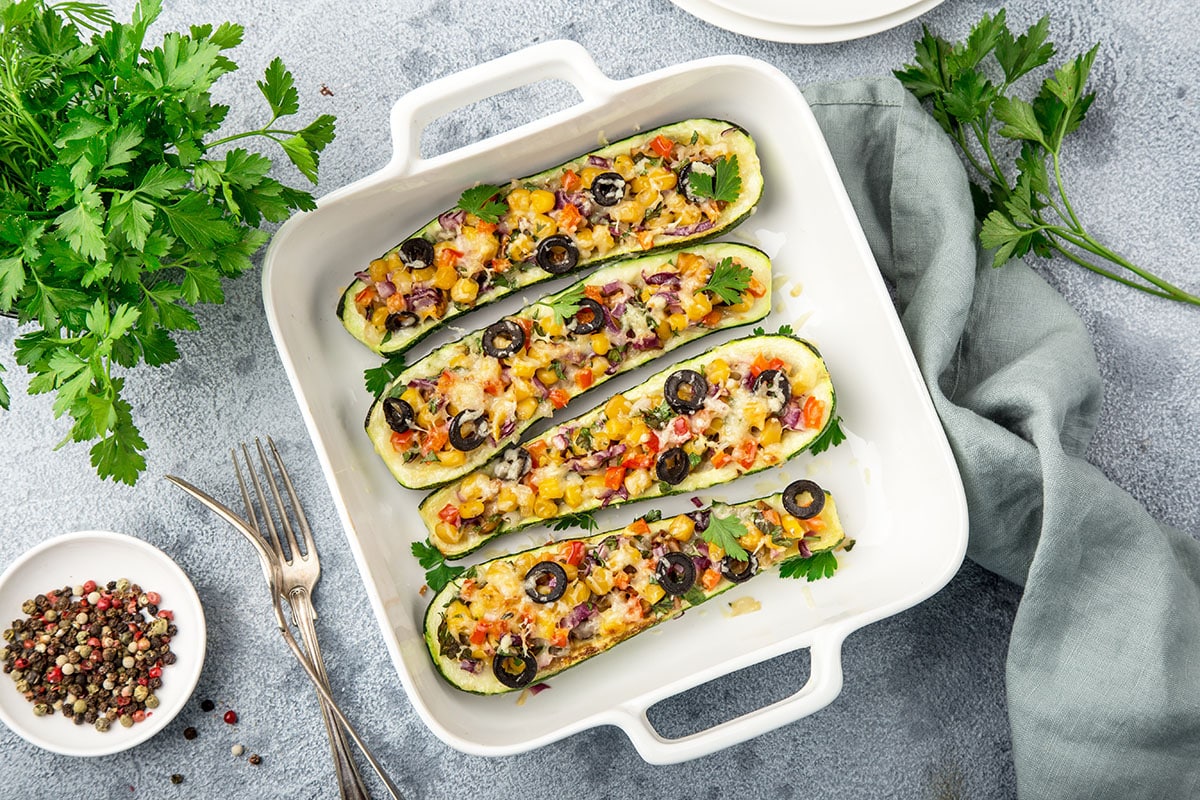 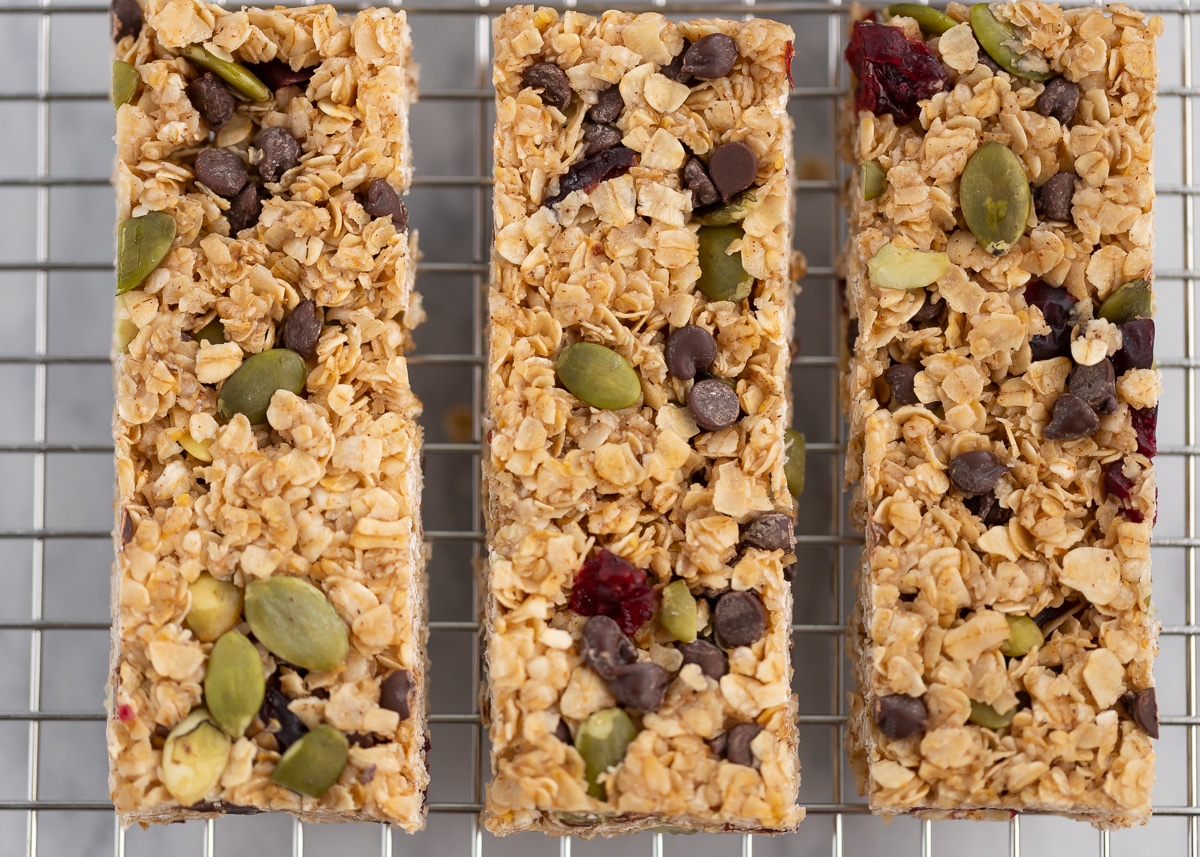