Breastfeeding is crucial for a child’s healthy development and growth. Breast milk contains a variety of bioactive molecules, including antibodies. Several studies have recently shown that breast milk of mothers who have had prior severe acute respiratory disease coronavirus 2 (SARS-CoV-2) infection or have been vaccinated against coronavirus disease 2019 (COVID-19) harbor corresponding antibodies. Several disciplinary research priorities have shifted in response to the COVID-19 pandemic, including those in maternal and child health.

The current preliminary investigation study published in the journal Nutrients sought to investigate the longevity of anti-SARS-CoV-2 immunoglobulin (Ig)A and IgG in breast milk during the in vitro-simulated gastrointestinal digestion. Additionally, the impact of the origins of these Igs––classified according to the type of maternal contact with the virus––were examined.

The study used in vitro colonic fermentation to assess the possible influence of these breast milk antibodies on the infant microbiota. A simulated digestion technique was utilized to examine the durability of anti-SARS-CoV-2 antibodies in breast milk samples from vaccinated and infected breastfeeding women in the infant’s digestive tract.

This pilot study selected breast milk samples from ten lactating women who had mRNA immunization against SARS-CoV-2 and participated in a prospective cross-sectional and observational investigation in Spain. Among these, five patients were vaccinated with the BNT162b2 mRNA vaccine and the remaining five with the mRNA-1273 vaccine. Overall, five patients had had an episode of COVID-19 infection.

Meanwhile, ten women formed a control group – who had not been exposed to the virus. ELISA was used to detect the existence of IgA and IgG SARS-CoV-2 antibody levels following the gastrointestinal stages. 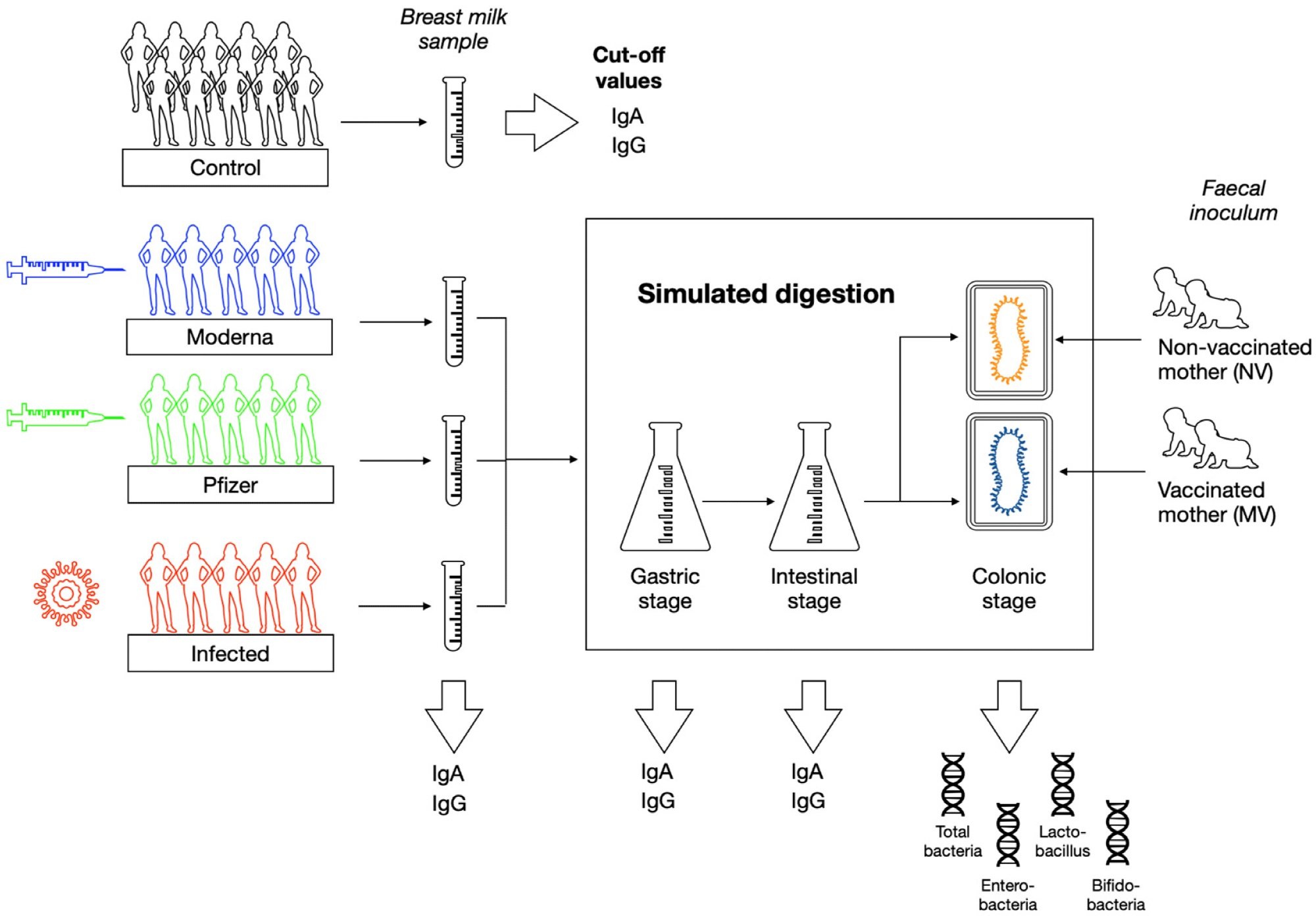 Overview of the study design.

The findings indicated that specimens from infected mothers had more anti-SARS-CoV-2 IgA and reduced IgG baseline values than the samples from mothers who had been vaccinated. However, after simulating gastric and intestinal digestion, both anti-SARS-CoV-2 IgA and IgG values plummeted but remained above control cut-off values in the majority of cases. Subsequently, the digested specimens were subjected to in vitro colonic fermentation to evaluate the potential influence of vaccination or infection with the virus on the microbiota composition; insignificant findings were reported.

IgA and IgG anti-SARS-CoV-2 antibodies were not entirely destroyed post gastrointestinal digestion, with the exception of the IgG contained in the breast milk from infected mothers––which was the most damaged by digestion. These findings suggested the possible immunological action of these Igs in the lumen of breastfed infants.

Anti-SARS-CoV-2 IgG levels post in vitro digestion differed significantly amongst vaccinated and infected women, with the latter group falling below the cut-off values. These findings indicate that immunization of breastfeeding women is a promising strategy for providing passive defenses against SARS-CoV-2 that are even more robust than those established during infection. Nonetheless, this discrepancy may be due to the fact that samples from the vaccinated and infected groups were taken at various stages of lactation.

The current research has some shortcomings. For instance, the results were limited by the in vitro methods used to examine the persistence of antibodies in the gastrointestinal tract. In addition, the number of samples examined for each category was restricted to five. Another restriction relates to the reported drop in the immunoglobulin levels post-gastrointestinal digestion while the IgA levels remain relatively stable. The oral cavity may depict the most effective target for IgGs, which was not evaluated in this study.

In summary, the current investigative preliminary study demonstrated that despite their decreasing levels, anti-SARS-CoV-2 antibodies survive in breast milk during gastrointestinal digestion without affecting the makeup or activity of the infant’s colonic microbiota. Despite being limited to an in vitro setting and small sample size, the report shows the potential role of breast milk anti-SARS-CoV-2 antibodies in protecting infants born to vaccinated and infected women. Further confirmation of such findings in humans is needed, as well as an examination of their actual prophylactic efficacy.