Finger and toenails are not just for painting or picking at the lounge room coffee table.

Many health problems will show up on your nails, so it’s worth paying attention and listening to what your nails are trying to tell you.

So, are your nails trying to tell you something?

1) Dents or Pits in the nails

Do your fingernails look like they have been in a hail storm?  More often than not, the cause of those dents is psoriasis. The inflammatory skin condition shows up as red, scaly patches on the skin and can also affect the skin cells in the nails. Instead of growing out smoothly, the surface of the nail takes on a dented appearance. Once the psoriasis is treated and under control, your nails will slowly return to normal. If they don’t, then, of course, it can also point to a condition known as ‘Reiter’s Syndrome’ which causes hair loss – so get it checked out to make sure!

Clubbing: Painless enlargement of the terminal phalanges that results when the nail bed overgrows and pushes the proximal nail upward. – www.crohnsforum.com

A healthy nail has a specific shape; slightly raised in the middle, then curving down a bit at the tip. When you see a nail that looks the opposite to normal, it’s called a spoon-shaped nail, and it’s a symptom of iron deficiency. ‘Nail Clubbing’ can be caused by the low level of oxygen in the blood and can be indicative of lung disease. Something that is not to be ignored! Our nails are made up of several layers of keratin, a type of protein. When nails aren’t protected – your hands are in water a lot, or exposed to cold, dry air – those layers tend to fall apart. The result are nails that are likely to peel. Obviously, this is a sign that you need to take better care of your nails. However, it can also indicate a diet that’s lacking in linoleic acid. The easiest way to up your intake is to increase your use of vegetable oils, adding to salad dressing or roast veggies. Brittle nails are ones that can’t hold on to moisture, so the layers of the nail plate dry out and crack. While it’s possible for an under-active thyroid to cause both dry skin and brittle nails, it’s more likely the cause will be either a diet low in iron (causing nails to become thin, brittle and easily broken) or excessive exposure to water.

Here are some home remedies that you might want to try: 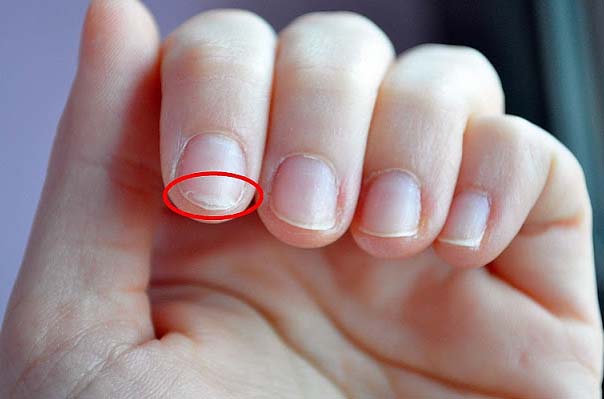 Are Your Nails Trying To Tell You Something? via beautyhacks.co.uk

A healthy nail should also look pretty and pinkish like a newborn’s ass. When it doesn’t, then that may be a reason to worry. Nails turning yellow could be a sign of lung disease or diabetes, while yellow spots on the nails can be an indicator of fungus or psoriasis. Since any of these conditions warrants treatment, it’s worth seeing a doctor if those yellow nails persist. Unless you frequently wear very dark nail polish — then you may notice a slight yellowing on your nails. This is not a reason to panic since your nails are just stained from the polish and will return to normal in no time. Tiny white dots on nails are normally nothing that you should be worried of. Most often, those spots are the result of some type of minor trauma to your nails. But if you’re certain you didn’t injure your nails and you are noticing recurring white spots, there are several other causes, including the skin conditions psoriasis and eczema, or a diet that’s deficient in the mineral zinc. Perhaps, an appointment with the doctor can be useful. Besides, it is always better  to be safe than sorry. ..or officially known as the lunula. It’s that little crescent at the base of your nail. Can you see it? Whether it’s visible or not — it isn’t a sign of anything. But did you know that the shape of the lunula determines the natural shape of the nail edge? Just saying.

What do your nails say about you? Are Your Nails Trying To Tell You Something?