Pregnant women appear to be at a greater risk of severe coronavirus disease 2019 (COVID-19), as identified by increased reports of intensive care unit (ICU) admission, mechanical ventilation, and death in this patient population. Unfortunately, the COVID-19 pandemic has worsened existing perinatal inequities among communities that already faced higher rates of maternal mortality and morbidity, along with poor infant outcomes.

Although pregnant women were not included in the first clinical trials of COVID-19 vaccines, evidence suggests that vaccination reduces the risk of severe acute respiratory syndrome coronavirus 2 (SARS-CoV-2) infection in pregnant women. Further, maternal immunoglobulin G (IgG) antibodies induced after natural infection and vaccination can be detected in the umbilical cord of newborns at birth. These antibodies might help to protect newborns from SARS-CoV-2 infections during their early life.

The BNT162b2 (Pfizer-BioNTech) and mRNA-1273 (Moderna) vaccines, which were developed against the SARS-CoV-2 spike protein, were found to show greater than 90% efficacy against COVID-19 for at least four months. However, the emergence of several SARS-CoV-2 variants of concern (VOCs) has altered the transmissibility and sensitivity to neutralizing antibodies (nAbs).

The SARS-CoV-2 Kappa (B.1.617.1) variant, which originated from the same lineage as as the Delta variant, has been categorized as a variant under monitoring (VUM). A new variant Mu (B.1.621) is more resistant to the BNT162b2 vaccine or sera from convalescent patients as compared to the wild-type strain.

Previous studies indicate that the receptor-binding domain (RBD) of the SARS-CoV-2 spike protein consists of several conformational neutralizing epitopes. These are the sites where single amino acid mutations such as L452 (Kappa and Delta), N501 (Alpha and Delta), and E484 (Kappa and Mu) lead to altered transmission and antibody-mediated neutralization. The Delta variant also contains a specific T478K mutation that improves its interaction with the human angiotensin-converting enzyme (ACE-2) receptor.

Several studies have indicated that maternal IgG production and maternal-fetal transfer can be influenced by antibody glycosylation profiles, time of exposure, or fetal sex. However, the neutralizing activity against SARS-CoV-2 variants during pregnancy, as well as transplacental transfer efficacy, remains unstudied.

A new study published on the preprint server medRxiv* assessed nAb activities against five strains of SARS-CoV-2 including the wild-type (WT) (Wuhan-Hu-1), Alpha, Kappa, Delta, and Mu variants in paired maternal and infant cord blood plasma samples that were collected during the time of delivery.

Samples were also collected from both vaccinated and infected pregnant women to compare the nAbs generated by vaccine versus natural infection, their efficacy against the new variants, clinical correlates of nAb production, and impact of timing of vaccination or natural infection on neonatal and maternal protection.

The current study included pregnant individuals who had a positive SARS-CoV-2 test and individuals who were fully vaccinated with a messenger ribonucleic acid (mRNA)-based COVID-19 vaccine. Thirty individuals from each cohort were chosen and matched on the approximate gestational age of the first vaccine dose and the earliest confirmed COVID-19 test.

Infant cord blood and maternal blood were collected during delivery. Thereafter, plasma was isolated from the blood and stored for further analysis. Four individuals who were unvaccinated with no evidence of prior infection served as negative controls. 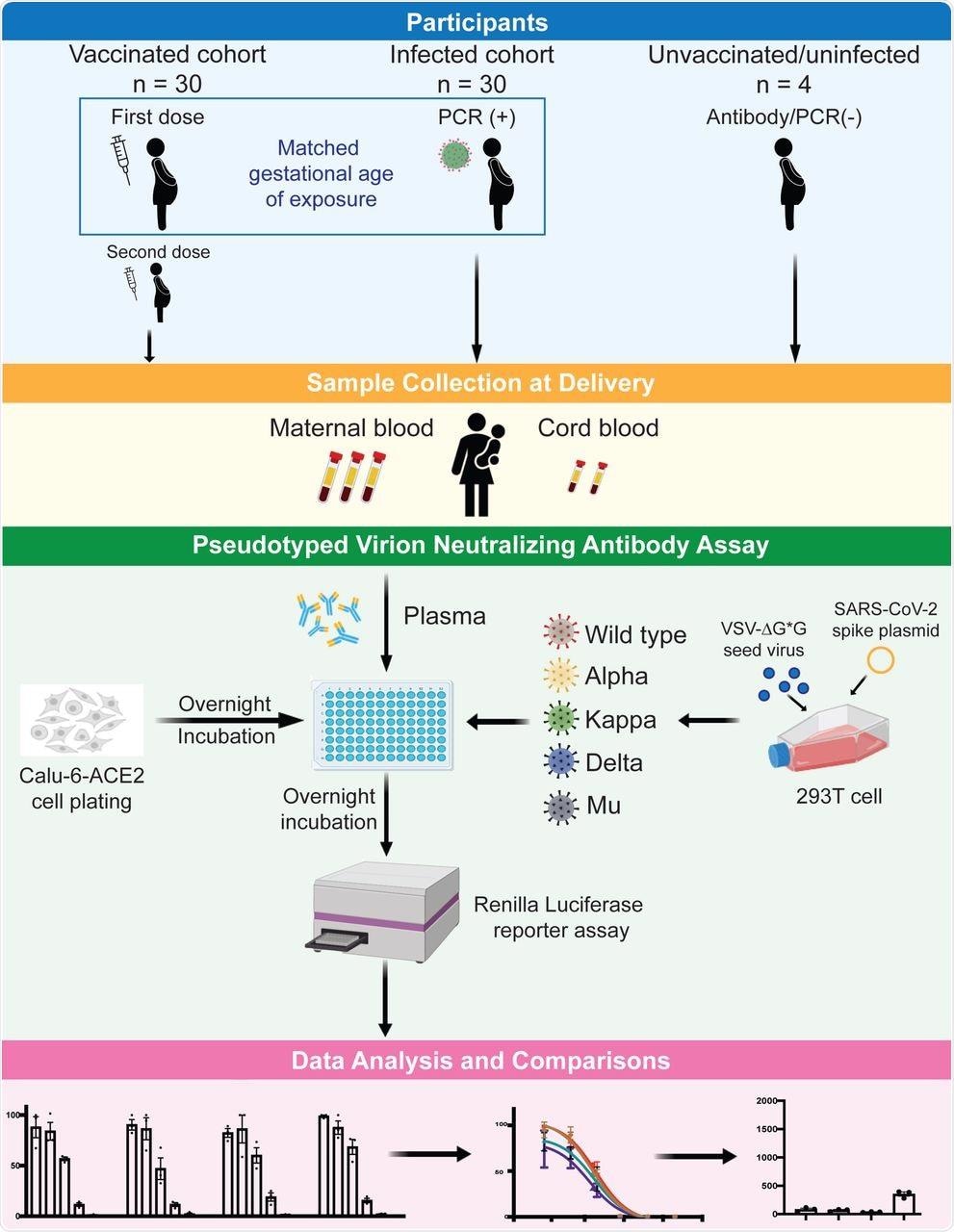 Neutralization titers were found to be higher in cord blood from vaccinated mothers as compared to infected mothers. However, no difference was observed in the case of maternal blood. 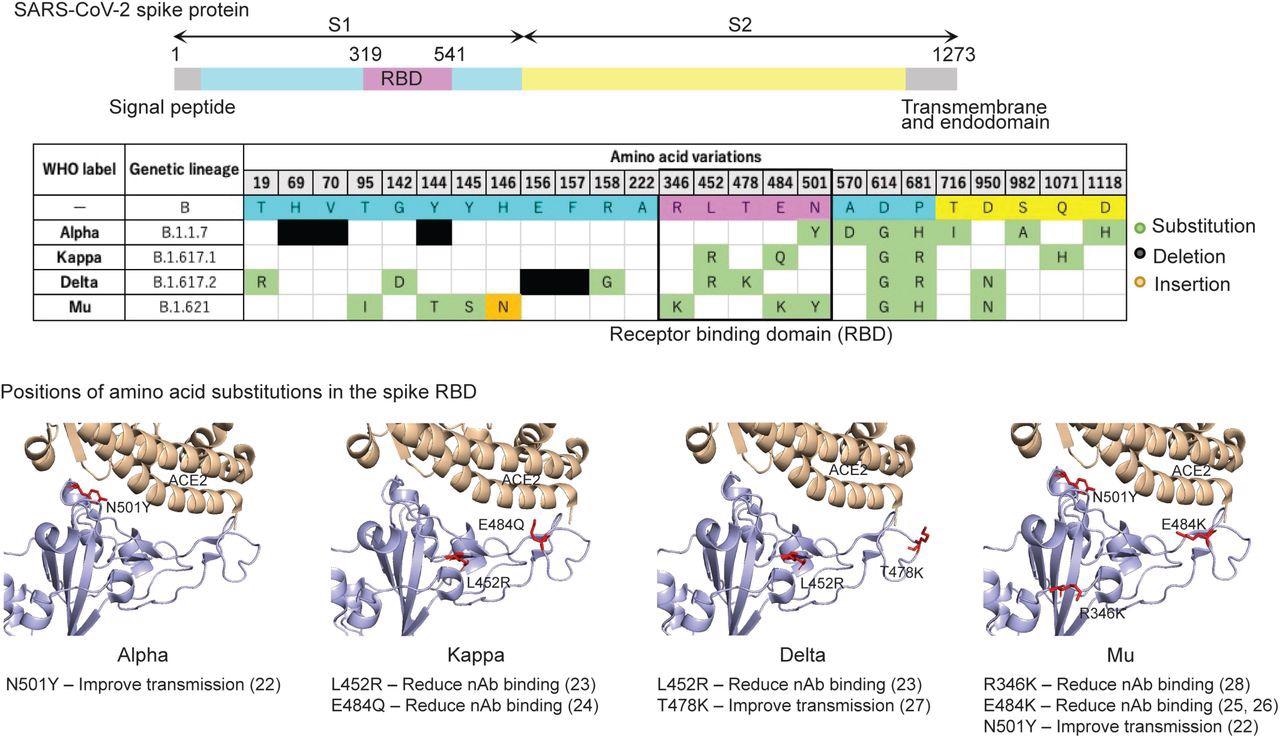 Positions of mutated amino acid residues in the Spike proteins from four variants. The residues L452R, T478K, R346K, E484K, and N501Y are labeled in red. The crystal structure of SARS-CoV-2 spike RBD and ACE2 (PDB: 6M0J) (64) was used as the template. All structure figures were generated with PyMol (65).

Vaccination was found to generate higher titers of nAb within the first few weeks in pregnant individuals that gradually waned. However, infection-elicited antibodies remained stable until delivery in both maternal and cord blood.

The results also indicated that for both the vaccinated and infected cohort, the Mu variant showed the highest resistance to nAb inhibition. The nAb activity of the Alpha variant was not significantly different from the WT variant for both groups. Although variable nAb response was observed against the different SARS-CoV-2 variants, neither trimester of exposure or vaccination/infection cohort had a role in the variability.

Neutralizing activity of maternal and cord plasma samples from vaccination cohort and infection cohort. (A) Comparison of the composite median NT50 titers against all examined strains between the vaccinated and infected group. The dot plots show NT50 values in maternal plasma and cord plasma. The dotted line indicates the cut-off threshold of this assay. (B, D) NT50 values of the maternal and cord blood were compared separately. Black bars represent the median of NT50 values. *P < 0.05; **P < 0.01; ***P < 0.001; ****P < 0.0001; ns, not significant (Mann-Whitney test). The trimester of exposure is indicated by color (red, first trimester; blue, second trimester; yellow, third trimester).

Taken together, the current study suggests that vaccination in pregnancy is highly effective in generating nAbs against all the SARS-CoV-2 variants included in the study. Although the vaccine-induced neutralizing activity is comparable to natural immunity, cord levels of nAb are higher after vaccination. 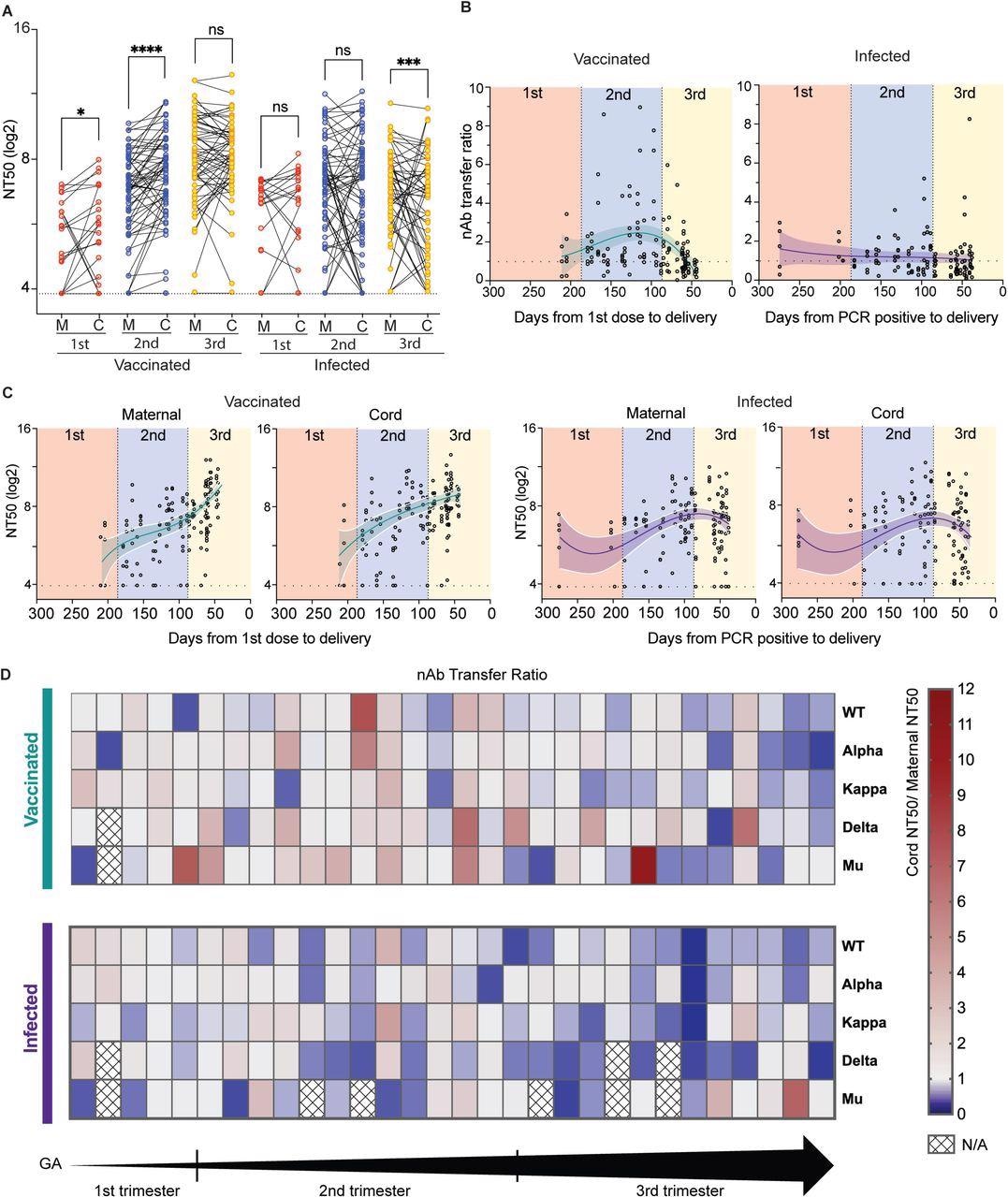 Vaccination 60 days before delivery is important for the efficient transfer of the antibodies to the neonates. The results of this study, therefore, strengthen current recommendations of vaccinating all pregnant women globally, as it would not only protect the mother but also the newborn against SARS-CoV-2 infection.

The study had certain limitations. First, the number of patients exposed in the first trimester was much less than the other two trimesters. Second, the sequencing data for the natural infection cohort is not available. Third, detailed antibody characterization was not carried out.

Talking to children about race and racism: An age-by-age guide – CHOC