In a research paper posted to the Research Square preprint* server and under consideration for publication in the European Journal of Pediatrics journal, researchers assess the different clinical symptoms of the severe acute respiratory syndrome coronavirus 2 (SARS-CoV-2) infection in children and adolescents across different time periods.

Globally, SARS-CoV-2 has infected over 397 million people and caused over 5.7 million deaths as of February 7, 2022. SARS-CoV-2 variants of concern (VOC) manifest as different symptoms across different age groups. For example, both the Alpha and Delta VOCs have been shown to induce more severe symptoms in children and adolescents as a result of the weaker immune response in these individuals.

The present study explored the different clinical characteristics manifested by SARS-CoV-2 infections in children and adolescents due to the emergence and dominance of the SARS-CoV-2 Alpha and Delta VOCs during various time periods.

This retrospective cross-sectional study included reverse transcription-polymerase chain reaction (RT-PCR)-confirmed SARS-CoV-2-infected children and adolescents under 16 years of age. The study participants were characterized into several groups including infants aged zero to one year, toddlers aged one to three years, preschoolers aged three to six years, children in their middle childhood aged six to 12 years, and adolescents aged between 12 and 16 years of age.

When a child or adolescent was found to be positive for COVID-19 by RT-PCR, the individual’s physician or pediatrician was informed and required to contact the infected individual to examine the person’s health and assess any symptoms. The physician then noted the symptoms in the structured symptom questionnaire.

In the event that the patient presented a symptom that was not mentioned in the symptoms list, the physician added it to the list. Any new symptoms that were observed throughout the course of the infection were also added to the symptom questionnaire. When the data was collected for the study, symptoms were classified into groups including respiratory, gastrointestinal, neurology, general, and other symptoms.

The mean age of SARS-CoV-2-infected children in the third and the fourth COVID-19 waves was 8.54 and 7.86 years, respectively. In the third and the fourth waves, 37.5% and 49.9%, respectively, of the infected children reported at least one symptom. However, the difference in symptomatic manifestations in the respiratory, neurology, and gastrointestinal systems was negligible. 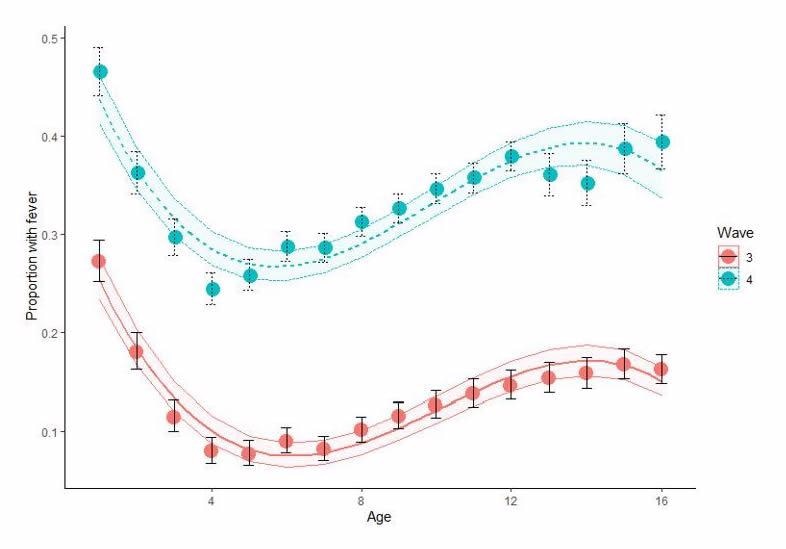 Among symptomatic individuals, the proportions of general symptoms among the studied population were 54.6% and 75.7% in the third and fourth waves, respectively. Fever was the most common symptom observed in 36.1% and 66.1%patients in the third and fourth waves, respectively. In contrast, a reduction in the frequency of respiratory symptoms from 42.1% to 54.1% was observed in the fourth wave compared to the third wave, especially among younger children up to six years of age.

Febrile illness was also noted in 33% and 66% of asymptomatic and symptomatic COVID-19 patients, respectively, during the fourth wave. This significant difference in the proportion of febrile illness in patients from the two waves indicated that different VOCs have different implications owing to their varied virulence.

The surveillance of the various symptoms caused by emerging SARS-CoV-2 VOCs can enable efficient handling of the spread and transmission of the virus.

Research Square publishes preliminary scientific reports that are not peer-reviewed and, therefore, should not be regarded as conclusive, guide clinical practice/health-related behavior, or treated as established information.