Living on only $25 a week, not by choice, is not a situation any of us would ever want to see ourselves in.

One of our followers, Princess Fiona (not her real name), has admitted to have lived a hand-to-mouth existence at the lowest point in her life.

It might seem unbelievable, but she said that she did survive on $25 a week, having two children and a good-for-nothing husband at that.

But before you pour out every ounce of pity you have for Princess Fiona, her story is probably one that you would want to read to get inspired for today.

This is her story:

My story starts with me surviving on $25 a week. Yes, this might sound unbelievable – but I did it. I lived on only $25/week because I had no choice.

I was in a disastrous relationship with two children — one of which was a baby. People always ask what happened and I explain it as a difference of opinion.

He thought it was ok to steal and not come home for two weeks at a time and I thought stealing was wrong and that he should at least text to tell me he was alive. I stupidly allowed him to ‘pay’ the bills.

When I left, there were debts and no money to pay them. I immediately organised to pay something each week but once I had sorted all this, I was left with $25 a week for everything else. Luckily, I was breastfeeding and used cloth nappies, and I mean the square old fashioned use a pin kind!

After crying myself into sanity, I composed myself. I then took stock and found 40 packs of instant porridge at the supermarket for 40c. I got some super cheap laundry detergent, soap, washing liquid, toothpaste. You know the luxuries of life. I had a vegetable garden that produced salad ingredients, but not much as they were in pots. This is what I lived on for the first week.

I couldn’t afford fuel, but luckily I had a push bike. On Tuesday nights, the local supermarket cleared out their old bread and cakes. Now when I say reduced, I mean to 25c a pack of bread / finger buns, they also had a mega pack of sausages for a super cheap price ($1-$2). I must have looked a real sight walking out with a trolley loaded up with cakes. I then found a green grocer that would sell bags of not-so-fresh veggies. They were edible but not for long. I would cook them up and freeze them and eat pureed vegies, sausages and bread roll for dinner. Breakfast was always porridge and lunch was vegemite on a bread roll.

I decided I needed to take control of my life so everything became a matter of lists, food planner list, grocery lists, to-do list, bills list — my life was made of lists. Then a list of life changes so I would never be in that situation again. I get laughed at walking in with my display folder with all my bills, shopping list, food plan, but it works. This lasted about 6-8 weeks before my finances were at a stage I could afford $50 a week, we thought this was heaven. I will never forget my kids’ faces when I got a chicken breast and we had chicken pasta. By this stage, word got out, people were inviting me for dinner and morning teas. I didn’t know this was a way of making me eat healthier. I volunteered at a school canteen and the others refused the leftovers, so I got them. Heaven cold mini pizzas, sausage rolls, yoghurts, flavoured milks and cheese! All these helped me out.

I learned a few lessons along the way:

Those days are far behind me now. I worked my way up from a volunteering pauper to business manager. I got the man of my dreams and we got married, had my daughter and have all the nice things I ever dreamed of in life but I will never forget those two months. It has been a humbling experience for me and my children.

My current motto in life, after getting spoilt by my hubby, is “I am in love with my dishwasher” (admit it so are you).

Were you inspired by her story? 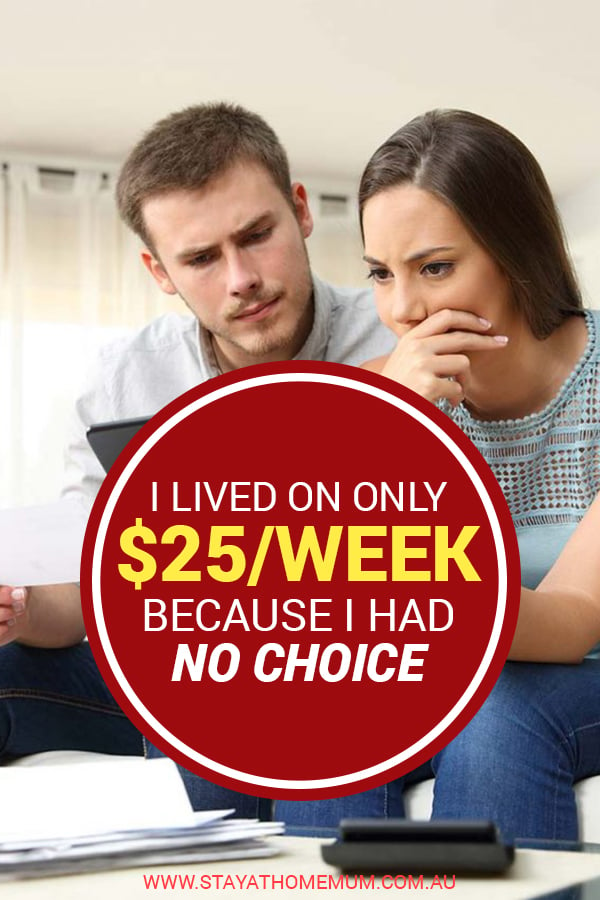