I was a wild, unruly, beer-drinking football player and she was incredibly mature, really amazing and a total babe. She had her life together and it felt like she was completely out of my league.

Then in 2012, I had a really big heartbreak. I kind of turned myself inside out during the healing journey and it changed me for the better. I decided to be single for at least six months and dive into the journey of self love.

When I decided to put myself back out there, Rosie was dating someone. But when they broke up in the Summer of 2012, she asked me out on a date. That date just completely changed our lives. It was like we both knew instantly and we’ve been together ever since. We moved in together within a few months and then got married in March 2013.

Growing up, I didn’t really have a lot of trans people in my life or many displays of people transitioning. But when Rosie and I had been married for three years, someone close to me had a friend who was trans and went to have top surgery, and I followed their entire journey through social media.

I was always pretending to be a boy when I was very little, back in the ’80s and ’90s, but until you’re introduced to a possibility, you don’t really know it’s a possibility. Although I had had minor preoccupations with people who were trans, when I finally got a closer introduction to that journey, I realized, “Woah, this might be me.”

What I love about my wife and our relationship is that we really came to each other from a place of total self acceptance and love. We’ve always given each other the freedom to be exactly who we are. It was the same when I came out as trans in 2015, her attitude was, “This is not really a surprise. I love you for who you are.”

I wanted to take it slowly and give myself permission to say “yes” or to change my mind, so I started taking testosterone and experimenting with different names. The name was actually the hardest to land on, but as the physical changes started happening, I realized this was who I had been all along. It felt incredible. It felt like home.

My favorite story about communicating that I’m trans comes from my mother. At the time, Rosie and I owned a yoga studio in North Carolina, and we were struggling financially. I thought telling my mom might be a big, emotional conversation, but that’s not really my family and I wanted to meet them where they were at; I realized it could be a casual, easy conversation like all the other conversations my family have.

So I called my mom and asked her what she would have named me if I was a boy. She asked me why and I said, “Because I’m thinking about becoming one. Are you surprised?” Her response was that she was only surprised that I could afford it. And that was that.

Kit (right) and Rosie Volcano have been together for a decade.
Kit Volcano

Back when we had first gotten married, Rosie had been an egg donor and talked about being a surrogate. She had always wanted to be a mother but I wasn’t quite ready. During those early years of marriage, someone came into my hair salon who wanted a child, and a conversation about Rosie being a surrogate for him happened. Many years later, in 2019, we ended up creating a baby together with that man and his partner. Rosie and I now have a child who we co-parent with two other gay men. He’s three years old and we are a four parent family where each set of parents has 50 percent custody.

When Rosie had our baby I caught him as he was born. As soon as I felt his life in my hands I got this sense of knowing that I had never had before; that I was supposed to give him a sibling. I remember the moment so clearly, because I knew that his sibling needed to come through me.

Rosie and I began trying to rearrange our lives to make space for another baby and I stopped taking testosterone. It was hard for me; the shift in my body and the hormonal changes were really challenging. Although I enjoyed the ability to feel more sensitive and connected, it was like going through a third puberty. There were a few months where it was like the worst PMS you could imagine. I went from being a muscular fit dude to having a curvy feminine body, and now when I have my mask on or people see me from behind they tend to register me as a woman. 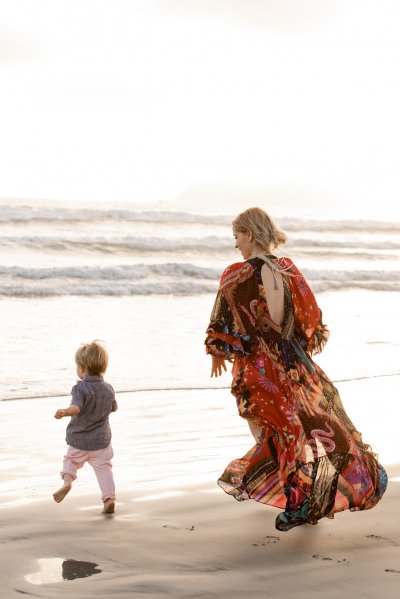 Rosie Volcano with the couple’s son. They co-parent their son with another couple.
Kit Volcano 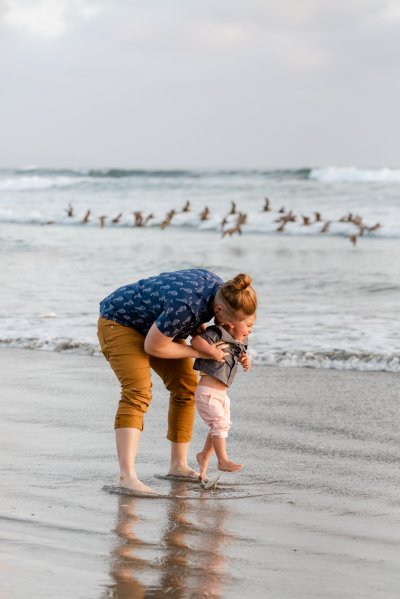 Kit Volcano with his son. Volcano is now trying to get pregnant to give his son a sibling.
Kit Volcano

During all this, I was imagining carrying a child and it being intense. Rosie, meanwhile, still wanted to carry another baby herself. She loved being pregnant. All I was really attached to was the idea of having a baby that was genetically my child, so six months ago, I suggested we retrieve my eggs and put an embryo in Rosie’s body. As soon as I said that we both clicked.

After that conversation, we began researching the IVF process and different IVF clinics. We live in San Diego and Mexico offers cheaper IVF and we found a clinic in Tijuana that meant we could save more than $10,000 and only had to drive around 40 minutes to get there. It felt like a smart move because the money saved could be put towards this baby.

The IVF process actually took around two weeks during January 2022 and when it got to the point in my menstrual cycle that I would normally ovulate the egg retrieval procedure took place. During that time, Rosie’s dad became extremely sick and she had to fly to Delaware and back, and then when we went in for egg retrieval, no eggs were retrieved. It was pretty devastating news, but I think the hardest part was how difficult it was to manage my emotions while on the IVF hormones.

At the end of the appointment, the doctor told my wife, through a translator, that I had no chance of ever having a baby. It was not the best experience overall. We’re not going to completely write off IVF, but now, I feel my only option is to do what I do when I feel lost: reassess where we stand, reassess what our desires are and proceed with the new information.

After the IVF hormones wore off, we went back to the drawing board. I decided that I’m going to support myself naturally and spend a year trying to get pregnant with artificial insemination using a sperm donor. This means I will carry the baby if I am successful in getting pregnant.

The next steps are to begin taking supplements, get in incredible shape and find an amazing doctor who can match my level of faith in being able to have a biological child. I’d love a girl but I’d be happy with a boy, too. My son, when we ask him what he wants, says, “I just want a baby.” He loves babies so much that he chases their cries in stores so he can see them.

I was going to begin taking testosterone again right away after the IVF process was complete, because my more feminine form was getting kind of hard to live with. But now that our plans have pivoted, I have got to go on a deeper journey of accepting and loving my body as it is, and support it to be able to carry a baby.

This IVF journey, and what it has now become, was about discovering what was important to me, honoring and loving that and also believing it was a possibility. To me, it was important to have a genetic child and not to shame myself for wanting that. A lot of people say we can adopt, and I’m sure we will adopt at some point, but there is a knowing inside me that I have to have a genetic child.

Rosie and I lost our yoga studio in 2016 and went from being pretty much homeless to building a successful business in a couple of years. For a long time, I subscribed to the narrative that I would never be successful as a queer person; that money, wealth and a very comfortable lifestyle were things I couldn’t have because it seemed that opportunities for that to happen would be limited by being queer. Now, I believe it’s about making yourself right for your desires and believing that those desires can be possible. When you have that combination a world of opportunities can open up to you. That has happened in my life, in this journey, in my marriage and the home I own. So as a human being, I just want to be an example to others that anything is possible.

Kit Volcano is a business and life coach living in San Diego with his wife, Rosie and their son. Kit and Rosie co-founded coaching business The Little Volcano. You can find out more at thelittlevolcano.com or follow Kit @kitvolcano on Instagram and TikTok.

All views expressed in this article are the author’s own.

As told to Jenny Haward.