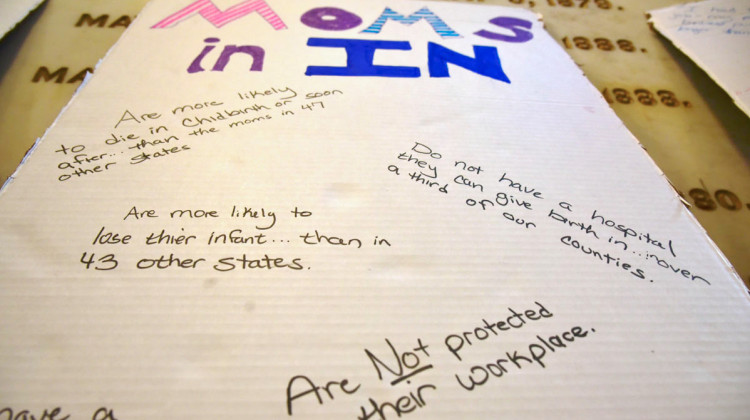 A sign from a rally at the Indiana Statehouse in 2021 says mothers in Indiana aren’t protected in workplace and lists other statistics on maternal mortality.

Listen to the broadcast version of this story.

The bill would require employers to provide reasonable accommodations for pregnant workers. It passed the U.S. House with significant bipartisan support back in May, but has so far been ignored by the U.S. Senate.

Rima Shahid is executive director of Women4Change Indiana. She said while an executive order from Gov. Eric Holcomb this year requires accommodations for executive branch employees in Indiana, lawmakers – state and federal – need to protect all pregnant Hoosiers.

Join the conversation and sign up for the Indiana Two-Way. Text “Indiana” to 73224. Your comments and questions in response to our weekly text help us find the answers you need on statewide issues.

Shahid said other issues like lack of child care and a persistent gap in pay could be keeping women away from jobs, at a time when employers are clamoring for workers.

Women4Change is hosting a virtual “State of Women in Indiana” event this Saturday to discuss those, and other economic issues affecting Hoosier women.