A woman was found dead in an apartment in northern Israel early Friday morning, in what appeared to be a deadly case of domestic violence.

The husband was arrested at the scene on suspicion of murder shortly after paramedics declared her dead at their home in Nof Hagalil, a northern town formerly known as Nazareth Illit.

Rasmia Barbur’s husband had called police and said he’d killed his wife shortly before 1 a.m. on Friday. The couple’s three-year-old son was at home at the time of the suspected murder.

Paramedics from the Magen David Adom rescue service who responded to the call said Barbur was found with wounds indicating she had been stabbed and had no pulse.

The couple were members of Nof Hagalil’s Arab community, Haaretz reported. There was no history of contact with social services.

The killing appeared to be the first case of deadly violence against a woman by a partner or relative in Israel since the start of 2022. In 2021, 16 women were killed by someone they knew, down from 21 killings a year earlier, according to statistics compiled by Bar-Ilan University.

However, the killing seemingly added to the swiftly mounting tally of slayings in the Arab community. Since the start of the year six Arabs, including the woman, have been killed in criminal cases, continuing a trend that saw a record 126 killings in 2021.

Arab communities have seen a surge in violence in recent years, driven mainly by organized crime.

Arab Israelis blame the police, who they say have failed to crack down on powerful criminal organizations and largely ignore the violence, which includes family feuds, mafia turf wars, and violence against women. The community has also suffered from decades of neglect.

Recently, government officials have championed separate plans meant to address both violence against women and violence in Arab society. 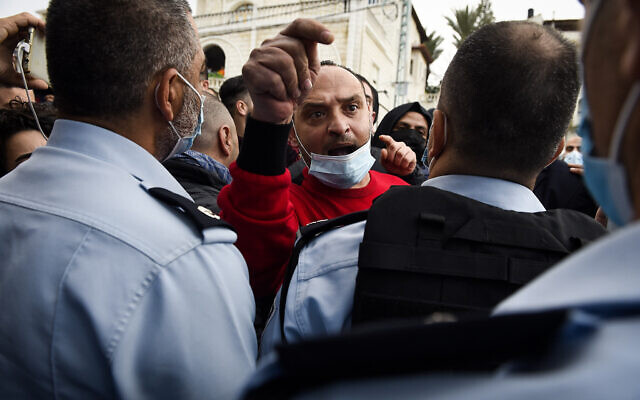 Israeli Arabs protest against violence, organised crime and recent killings among their communities, in the Arab town of Umm al-Fahm, February 5, 2021. (Roni Ofer/Flash90)

Budget plans passed late last year call for billions of shekels over the next five years to be funneled toward addressing violence in Arab society and developing the community’s economy.

During a global pandemic, one tiny country is producing research that’s helping to guide health policy across the world. How effective are COVID-19 vaccines? After the initial two shots, does a third dose help? What about a fourth?

When The Times of Israel began covering COVID-19, we had no idea that our small beat would become such a central part of the global story. Who could have known that Israel would be first at nearly every juncture of the vaccination story – and generate the research that’s so urgently needed today?

Our team has covered this story with the rigor and accuracy that characterizes Times of Israel reporting across topics. If it’s important to you that this kind of media organization exists and thrives, I urge you to support our work. Will you join The Times of Israel Community today?

You’re serious. We appreciate that!

We’re really pleased that you’ve read X Times of Israel articles in the past month.

That’s why we come to work every day – to provide discerning readers like you with must-read coverage of Israel and the Jewish world.

So now we have a request. Unlike other news outlets, we haven’t put up a paywall. But as the journalism we do is costly, we invite readers for whom The Times of Israel has become important to help support our work by joining The Times of Israel Community.

For as little as $6 a month you can help support our quality journalism while enjoying The Times of Israel AD-FREE, as well as accessing exclusive content available only to Times of Israel Community members.