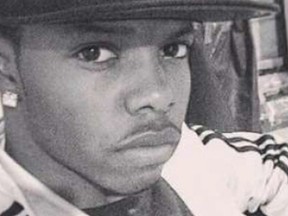 Corey Cunningham, 24, was found guilty in the stabbing death of a woman on Oct. 11, 2019 in Scarborough.

After stabbing her four times from behind, Corey Cunningham left his pregnant ex-girlfriend bleeding on the floor of her Scarborough apartment and made the call.

“He couldn’t control her and get her to abort the pregnancy, so he decided to end both lives,” Crown Josh Levy told Cunningham’s sentencing hearing. “It was cold, calculated, brutal and heartless.”

The would-be killer even kicked Elgin to make sure sure she was dead. But she wasn’t dead. She was just faking it so Cunningham would stop his attack and leave before she bled out.

Last month, Justice Robert Goldstein found the 26-year-old father of two guilty of attempted murder and theft of her cellphone in the 2019 attack. A relieved Elgin spoke after the ruling, telling the Toronto Sun she hopes to be an advocate for victims of domestic violence.

Cunningham’s lawyer used her words Thursday to argue for a mistrial and a publication ban — requests the judge quickly denied.

“It’s not like she didn’t have a right to comment to the Toronto Sun. She did,” Goldstein said.

“It is domestic violence,” insisted the Crown.

We apologize, but this video has failed to load.

And despite Cunningham being a first offender, the prosecutor urged the judge to sentence him to life without parole for 25 years.

“When Mr. Cunningham left Ms. Elgin’s apartment after stabbing her and slicing her in the neck, he thought he had succeeded in killing her,” Levy said. “It was clearly premeditated, planned and deliberate. It was done with the obvious motive of snuffing out the life of the unborn child he thought Ms. Elgin was carrying.”

It was only luck and his victim’s ingenuity that prevented him from a first-degree murder charge.

“This is one of those infrequent cases where a life sentence is a fit sentence notwithstanding Mr. Cunningham not having a criminal record and still a relatively young age.”

Defence lawyer Elliott Willschick said a life sentence would be “crushing” for someone with such good prospects of rehabilitation.

He argued Cunningham should be given a six-year sentence and with four years of credit for pre-trial custody, he should serve another two years.

The judge admitted that after reading the pre-sentence report, it was hard to believe this otherwise upstanding, hard-working young father had planned — and was almost successful — in killing Elgin.

“Is this the same guy? It didn’t make any sense to me,” wondered Goldstein. “I don’t really get it.”

We apologize, but this video has failed to load.

The couple began dating after Canada Day 2019. The on-again, off-again relationship ended when she said she was pregnant and wanted to keep the baby.

When Cunningham stopped by her apartment unannounced on Oct. 11, Elgin believed they were still friends who had agreed to co-parent. When he offered her a back massage, she sat on the floor at his feet.

Suddenly, he was stabbing her in the neck and shoulder with two of the wounds narrowly missing her aorta and jugular vein.

Elgin, who says she suffered a miscarriage after the assault, told the court in her victim impact statement that she’s been diagnosed with PTSD and hasn’t been able to return to Scarborough out of fear for her safety.

Her right shoulder is lower than her left, she has no feeling in her right ear, back of her neck and lower part of her head and still has a bone chip near her spine that can’t be removed without a chance of being paralyzed. Unable to afford physiotherapy, she’s had to rely on following exercise sheets from Sunnybrook hospital.

When given the opportunity to address the court, Cunningham insisted his crime was out of character and asked for Elgin’s forgiveness.

“I’m very sorry things went that way that day; nobody deserves traumatic experiences and it was also traumatic for me.” he said. “I’m not a monster, I’m just a man who made a terrible, embarrassing, sad, bad mistake.”

The judge has reserved his decision to April 12.

From our newsroom to your inbox at noon, the latest headlines, stories, opinion and photos from the Toronto Sun.

Thanks for signing up!

A welcome email is on its way. If you don’t see it, please check your junk folder.

The next issue of Your Midday Sun will soon be in your inbox.

We encountered an issue signing you up. Please try again

Postmedia is committed to maintaining a lively but civil forum for discussion and encourage all readers to share their views on our articles. Comments may take up to an hour for moderation before appearing on the site. We ask you to keep your comments relevant and respectful. We have enabled email notifications—you will now receive an email if you receive a reply to your comment, there is an update to a comment thread you follow or if a user you follow comments. Visit our Community Guidelines for more information and details on how to adjust your email settings.