Tayah and Adam are having a baby! (Picture: E4)

Married At First Sight UK stars Tayah Victoria and Adam Aveling have revealed they are expecting their first child together.

The couple, who first met at the altar in E4’s reality series last year, are set to become parents in just a few months’ time.

‘We’re so excited,’ Tayah enthused. ‘And the thing is we weren’t even trying! It just happened. I can’t believe it. We’re obviously just very fertile.’

Tayah’s pregnancy isn’t without nerves, however, as the reality star suffered a miscarriage in a previous relationship.

‘It’s definitely nerve-wracking and you have an anxious feeling when you find out you’re pregnant again after a miscarriage and you’re going through those emotions,’ she admitted.

Adam and Tayah were due to get married for real later this year after Adam proposed in their final vow renewal on the show. 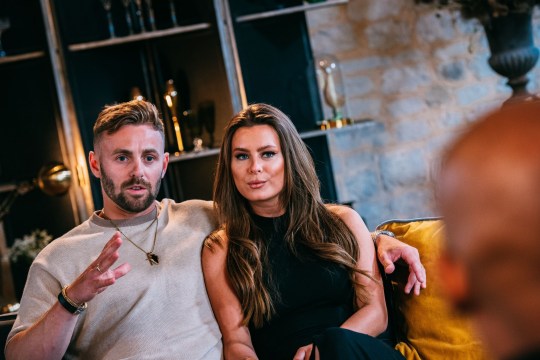 However, the arrival of their little one has prompted them to delay their plans.

‘We’ve pushed it back to next year,’ Adam continued to OK!. ‘We were going to get married on the date that both our parents got married so we were going to keep that tradition going, but now the baby is due around then so that can’t happen.

‘Otherwise Tayah would probably be going into labour walking down the aisle and be in the hospital in a wedding dress!’

Adam and Tayah were quick to open up to each other on Married At First Sight, with Adam confessing his love for his wife on the last night of their honeymoon.

‘I definitely know that I do love you,’ he told her, with Tayah also telling him that she felt the same way.

Speaking to the camera, Tayah said: ‘Everyone talks about a whirlwind romance and I’m like does that happen but now everything makes sense. I feel as if Adam and I are literally made for each other.’

Married At First Sight UK is available for catch-up on All4.

If you’ve got a celebrity story, video or pictures get in touch with the Metro.co.uk entertainment team by emailing us celebtips@metro.co.uk, calling 020 3615 2145 or by visiting our Submit Stuff page – we’d love to hear from you.