Despite the film industry being a notorious boys’ club, we’re seeing more and more female stars, producers, directors, and creators in Hollywood. Part of being a woman in any industry can involve dealing with pregnancy. Although many pregnant actors continue working throughout their pregnancies, producers and directors must decide what message to send the audience.

Some shows choose to hide their actors’ pregnancies; others write baby bumps into the show. TV buffs know the classic show Mary Kay and Johnny, but they may not know that Mary Kay Stearns made history for being one of the first pregnant women with her status incorporated into a series.

According to Insider, Stearns was one of the first women to have her pregnancy written into the television show she was working on. Although the show Mary Kay and Johnny isn’t as well-remembered as I Love Lucy, the Stearns paved the way for Desi Arnaz and Lucille Ball in a lot of ways.

Before Lucy and Ricky graced television sets all over the world, the Stearns starred on their sitcom. Mary Kay Stearns and her husband Johnny Stearns played themselves on a show about a bank employee and his silly wife.

Sound familiar? It was similar to the plot of I Love Lucy, which it preceded by a few years. Mary Kay and Johnny aired between 1947 and 1950. Ball and Arnaz debuted in 1951.  Although Ball is better remembered by TV viewers, Mary Kay came first.

Mary Kay Stearns made TV history with her on-screen pregnancy

Ball wrote her pregnancy into I Love Lucy, and viewers loved it. According to MeTV, 72% of American households watched the episode where Ball’s character gave birth. But Stearns was the first woman to have her pregnancy written into her show. Her real-life pregnancy was turned into a storyline on Mary Kay and Johnny, paving the way for Ball a few years later.

Pregnancy may seem like a normal part of life now. But in the 1950s, TV producers didn’t want any sign of sex or sexual activity onscreen. Since pregnancy means a character had sex at some point, networks did not want to include anything related to pregnancy on screen. For context, although Ball was allowed to write her pregnancy into season 2 of I Love Lucy, no one was allowed to say the word “pregnant.” That’s how taboo the subject was.

The Stearns made history with more than just the pregnancy storyline. Mary Kay and Johnny slept in the same bed on their show, which was unheard of at the time. Even Lucy and Ricky slept in separate beds throughout most of I Love Lucy.

How are on-screen pregnancies handled today?

Today, actors have the choice to hide their pregnancy while filming or embrace it with an on-screen storyline, if the material allows for it. Sex and the City wrote Cynthia Nixon’s pregnancy into the latter seasons of the show, although they hid Sarah Jessica Parker’s pregnancy. 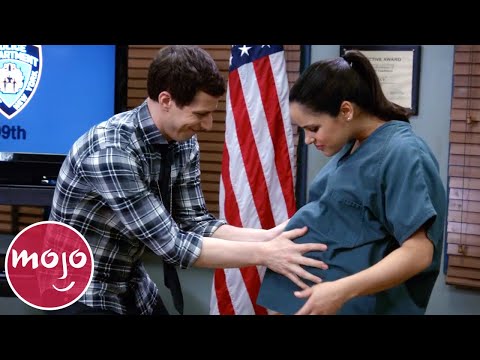