While most mothers love their children, not all love the physical experience of being pregnant.

That is clearly not the case for Iris Purnell, 38, who spent 16 years over the past two decades pregnant with her 12 children — and if it were up to her, she’d welcome even more children into the world.

“I feel like children are a blessing,” she told Fox News Digital in a phone interview.

The mother of 12 explained that she welcomed her first son in 2004.

She met her husband, Cordell “Storm” Purnell, who was also a father of one, nearly half a year later.

The pair bonded over their love of battle dancing after they crossed paths at a party in New York City.

Iris and Cordell Purnell met and fell in love in New York City. Today, the couple live in Los Angeles, California, with their 12 children.
(Courtesy the Purnell family)

“We got together, got to know each other,” said Cordell Purnell.

“We got married and had our first son together shortly after. So, we had three children at the start of our marriage,” he said.

The couple, who are from East New York and Bed-Stuy, Brooklyn, now live in Los Angeles. They said they hadn’t originally planned to have a big family.

“I found a new life and a new meaning of purpose.”

Cordell continued to pursue work as a professional dancer under his stage name, Storm, while Iris took a pause from the choreography work she dearly loved.

“I was trying to find life at that time because I never wanted to be a stay-at-home mom. That wasn’t what I wanted to do,” she said.

“So, it was a struggle for me mentally because I didn’t know how to articulate that I wasn’t happy.”

The yearning that Iris Purnell felt led her to seek out God by the time she welcomed the couple’s daughter in 2006.

“At that time, I had been going to church and decided to get saved,” Iris Purnell said.

“I found a new life and a new meaning of purpose.” 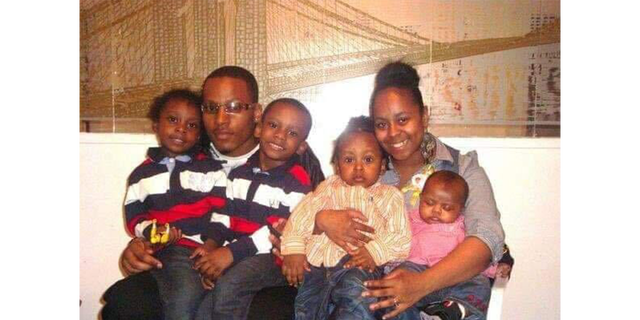 Cordell and Iris Purnell welcomed their fourth child in 2007. Pictured here with them are, from left, Malikhai, Cordell Jr., Janai and Trinity.
(Courtesy the Purnell family)

In total, the Purnells have welcomed seven sons and five daughters.

Iris Purnell told Fox News Digital that she and her family study the Bible together.

The scriptures they read together — such as Psalms 127:3-5 — reaffirm her beliefs.

“Behold, children are a heritage from the Lord, the fruit of the womb a reward.”

“We’re intentional about this walk with God,” she said.

“It has done wonders for our marriage, as far as us coming together, communicating and being patient with one another.”

Iris Purnell said she credits the Bible for getting her through the postpartum depression she experienced in 2016 after she underwent an emergency C-section and missed seeing the birth of son Michael.

To get through that tough point in her life, the mom said she prayed to God to lend her strength — and spoke positive affirmations to her infant son.

“I know words hold power, so I was mindful about the things that I was saying,” Iris Purnell recalled.

“I used to tell him how great he was and that he was going to be amazing. I’d say positive things out loud and let that be something that I kept my mind on — and it worked.” 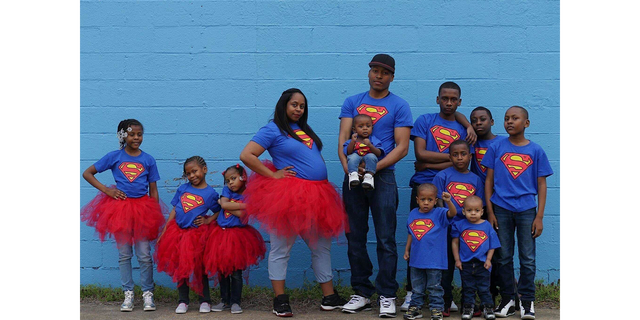 Pictured here in 2017 are Iris and Cordell Purnell, center, with 10 of their children. At the time, Iris was pregnant with the couple’s 11th child.
(Courtesy the Purnell family)

She added that she enjoyed each of her pregnancies and only experienced morning sickness and discomfort with daughter Trinity.

Iris Purnell said meditation helped her stay calm when it came time to deliver her children, even when she had to deal with a breech birth (when a baby is positioned feet first rather than head first).

BACK TO SCHOOL MENTAL HEALTH: HOW TO CHECK IN WITH YOUR KIDS BEFORE PUTTING THEM ON THE SCHOOL BUS

Dad Cordell Purnell said he couldn’t help but feel worried after seeing his wife undergo more than one emergency C-section.

The couple discussed their options after Iris became pregnant with Hope — their 12th child — in 2019.

Together they decided that tubal ligation would be their best option in terms of preventing a potentially dangerous strain on Iris’s body.

Tubal ligation, also known as tube tying, is a medical procedure that involves the tying or snipping of fallopian tubes as a means to stop pregnancy, according to the CDC.

“[As] a mom, I think she takes on the role of being a teacher, being a caregiver,” said Cordell Purnell of his wife.

“It wasn’t easy for me. I was actually against it at first,” Iris Purnell told Fox News Digital.

“But then I realized that marriage is about compromise. If we’re supposed to work together, then I have to see that [my husband is] looking out for my best interest. And so I agreed.”

She added that it’s still hard for her to accept that she can’t bring any more children into the world because she “thrives” when she’s in mom mode.

“I sincerely enjoy raising my children,” she said. “I love getting them ready for school, taking their clothes out, doing their hair and making them feel and look beautiful.” 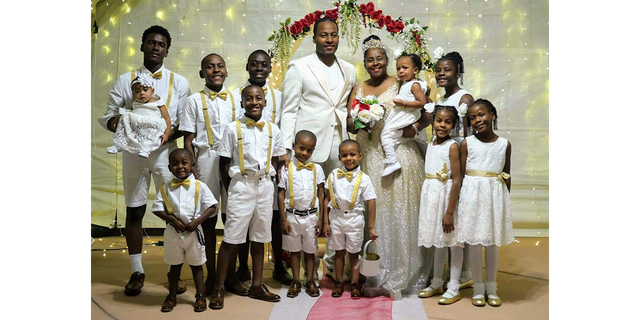 Cordell and Iris Purnell completed their family in 2019 with their 12th child. In this photo, the close-knit family is shown at the couple’s vow renewal.
(Courtesy the Purnell family)

Iris Purnell also enjoys helping her children with homework and giving her kids the attention they need.

“She always wanted to be a teacher, so this is a great purpose,” Cordell Purnell said.

“And [as] a mom, I think she takes on the role of being a teacher, being a caregiver. When I met her, she was in nursing school, so she gets to fulfill all of that.”

He continued, “It helps you understand why she had as many kids as she could have because she’s fulfilling all the outside dreams that she wanted to fulfill inside our home.”

The couple support their family through their social media activities and by selling merchandise.

Iris Purnell recently wrote on Instagram (where she goes by the name “Mrs. Storm”), “It is never too late, and our children aren’t too young, to learn and to experience the Lord for themselves. They first learn it by our walk and our patience in saying what the Lord would say to them instead of what we would say to them in conversations.”

Cortney Moore is an associate lifestyle writer/producer for Fox News Digital. Story tips can be sent on Twitter at @CortneyMoore716.