Last June, over a period of three days, a heat wave baked the Pacific Northwest. Temperatures soared to 117 degrees in a region where many homes don’t have air conditioners.

While final estimates of heat wave-related fatalities are still being determined, Kristie Ebi, a professor with the Center for Health and the Global Environment at the University of Washington, said approximately a thousand people are believed to have died from the extreme temperatures. “If anything else happened that in a few days killed 1,000 people, we’d call it a mass casualty event,” Ebi said. But the United States, like other countries, has been slow to mitigate the dangers of extreme heat, and the problem is only going to get worse.

The latest Intergovernmental Panel on Climate Change report, a summary of the most recent climate science, released Monday, reiterated that we can expect these heat waves to become more frequent and intense, exposing more of the population to danger.

The recently released second installment of the report, focused on climate impacts, adaptation and vulnerabilities, included a new section detailing the risks pregnant people face in a changing climate. A growing body of scientific research cited in the report details the ways in which climate-caused events like heat waves and other natural disasters affect maternal and fetal health. In the United States these risks are amplified by socioeconomic and racial disparities, with Black women already experiencing elevated risks of complications during a pregnancy.

It’s why Illinois Rep. Lauren Underwood, who co-sponsored legislation known as the Momnibus Act, included a bill called the Protecting Moms and Babies Against Climate Change Act. The legislation would fund training for medical professionals to identify risks posed by climate change for pregnant patients and would establish a Consortium on Birth and Climate Change Research at the National Institutes of Health (NIH).

Ebi, who was a lead author for the human health chapter of the most recent IPCC report, spoke to The 19th about the growing dangers of extreme heat, the need for more funding to research its implications and how to prevent health impacts in the future.

This interview has been edited for length and clarity.

As one of the lead authors of the latest IPCC report, can you paint a picture of what rising temperatures will look like here in the United States?

As the climate continues to change, we’re going to see not only increases in the average temperatures but along with that, the summers will be longer, start sooner and go further into the fall. So we’ll see these changes in the averages, but we also know that there will be significant changes in the frequency, intensity and duration of heat waves. The report that covers that for the IPCC came out last August and shows this significant increase in extreme events. We’ll see more events like the heat dome in the Pacific Northwest.

In the latest IPCC report, it says that women and those who are pregnant are more likely to suffer disproportionately in extreme weather events, like heat waves. Why is that?

Specifically, why women are at higher risk is a very good question. What we know from the epidemiological research is that there are associations between these higher temperatures and low birth weight, stillbirths and other adverse pregnancy outcomes.

There is research now that’s trying to understand the timing of heat exposure during pregnancy. For example, are there particular trimesters when babies are most at risk when exposed to higher temperatures? Exactly how these mechanisms work are under research. And I’m sure by the next IPCC report [which will come out in the next six to seven years], there’ll be a whole lot more understood about that.

Then you can also think about other kinds of extreme events like flooding that can reduce access to prenatal care. Depending on where you are in the U.S., you can have deliveries outside of the health care system and have impacts to babies and children because of lack of access to care.

This was the first time there was a section linking maternal health to climate change in the IPCC report. Why is that?

Each assessment report is mandated to be comprehensive, and the number of publications on temperature and adverse pregnancy outcomes has increased significantly in the past few years. The fact that this report highlights this issue is a reflection of where the literature stands.

It’s much more a reflection of the fact that historically, including today, there is really appallingly low amounts of funding for research in this area. Funding in the NIH for climate change and health has been running at about 0.02 percent to 0.04 percent of their budget.

President JoeBiden put $110 million for climate change and health into his [proposed] budget, which on the one hand, is a huge increase and on the other hand, is still 0.2 percent of the NIH budget. When you look at the size of the institute’s within NIH, $100 million is nothing. There’s only so much a community can do when you don’t have resources, and that’s human and financial resources. 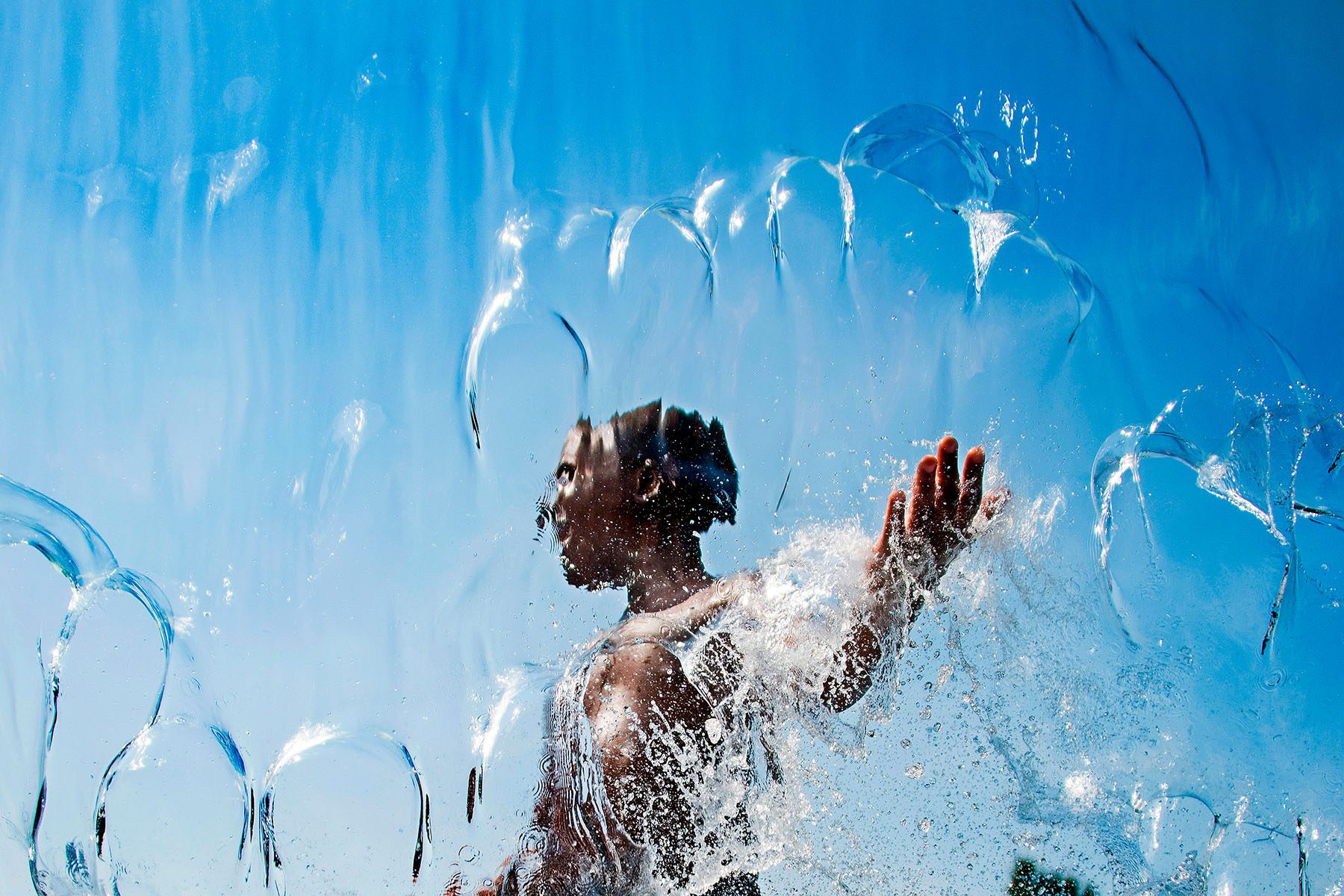 A child plays in a fountain as a heat wave rolls through the D.C. area. (JIM WATSON/AFP/Getty Images)

The report also mentions children’s vulnerability to heat. What do those impacts look like?

There’s been a lot of work to raise awareness about how many babies die every year untended in cars. Parents don’t understand how fast cars heat up and don’t understand that babies physiologically can’t adjust to that rapid increase in temperature.

When you think about children, there’s been lots of really interesting work done, for example, by Jennifer Vanos, a climate researcher at Arizona State University, showing how hot playground equipment and tarmac surfaces get. It’s also thinking about, as we have these really hot days, is it safe for children to go out and play when it’s so hot? Children aren’t necessarily great at remembering to drink sufficient fluids.

How can we mitigate the threats posed by extreme heat? What can cities do to help those most vulnerable?

One of the major ways to prevent adverse health impacts of heat waves is heat wave early warning systems. There’s been increasing skill in forecasting heat waves — for the heat dome here, we knew days in advance that we were going to have really high temperatures. But you need to have more than just the forecast. You need to have a whole early warning and response system. There’s several very good ones in the United States and around the world. They are not necessarily difficult, but they require a lot of coordination.

I think there’s real opportunities with thinking about setting multiple thresholds. For example, if you know that Saturday is going to be really hot but by Thursday the temperatures are going to be higher than normal, we have groups like babies, pregnant women and adults over the age of 65 who would already be at higher risk with those temperatures. So it’s about thinking about setting up tiered systems based on what we understand about who is vulnerable at different thresholds.

Then with the thresholds, what is it that you do? Who do you need to have at the table? How do you reach out to these different vulnerable groups? You need somebody from EMT, from the fire department, from the police department, who reaches out to the elder care facilities. You can think about reaching out much more broadly to those who are most vulnerable.