Prioritizing her personal and professional career. After a devastating update in her IVF journey, Peta Murgatroyd opened up about why now was the perfect time to compete on Dancing With the Stars.

“So much has been going on in the past year and a half with [my husband] Maks [Chmerkovskiy] and myself and our family. Maks was in Ukraine with the war and then me with constant miscarriages and now one failed IVF. I just took it upon myself to really sort of go back to my roots,” Murgatroyd, 36, told Us Weekly on Thursday, September 8, about joining season 31 alongside partner Jason Lewis. “After this first IVF failed, I was like, ‘What do I wanna do? Where am I happiest? So, I can get through this and just feel good about life.’ And I realized that I’ve just really missed dancing and I’ve kind of just come back into it and fell back into it.”

For the choreographer, returning to the hit competition series has been the “best decision” for her. “I’m not stressing now about ‘Oh my God, am I pregnant?’ The constant worry about when the second baby is going to come … I think it’s taken my mind off it and I’m doing what I love with a great guy.”

Murgatroyd also teased that she was a huge fan of Sex and the City before being paired off with Lewis, 51.

“I’ve seen every episode dozens of times. [I’ve watched] the movies and the newest [show] that came out [And Just Like That]. I was pretty stoked because, I mean, look at the hunk of Sex and the City. Everybody would give their right arm to dance with him,” she shared, referring to the actor who played Jerry “Smith” Jerrod on the HBO series. “I was just so fortunate though. When I met him, he was a nice guy [and] humble. There’s no ego. He’s nice and he’s dedicated. He wants to be here with me and work through everything and give his time to me. So everything just aligned and it’s a really nice surprise.”

The professional dancer noted the one downside to rejoining DWTS was missing her son’s first day of school. “It was the only thing that could take me away. I couldn’t really get out of this one. So I’m happy to be here though,” Murgatroyd, who shares 5-year-old son Shai with her husband, 42, explained. “Obviously it was pretty sad in some instances, but we’re getting through it. We’re good.” 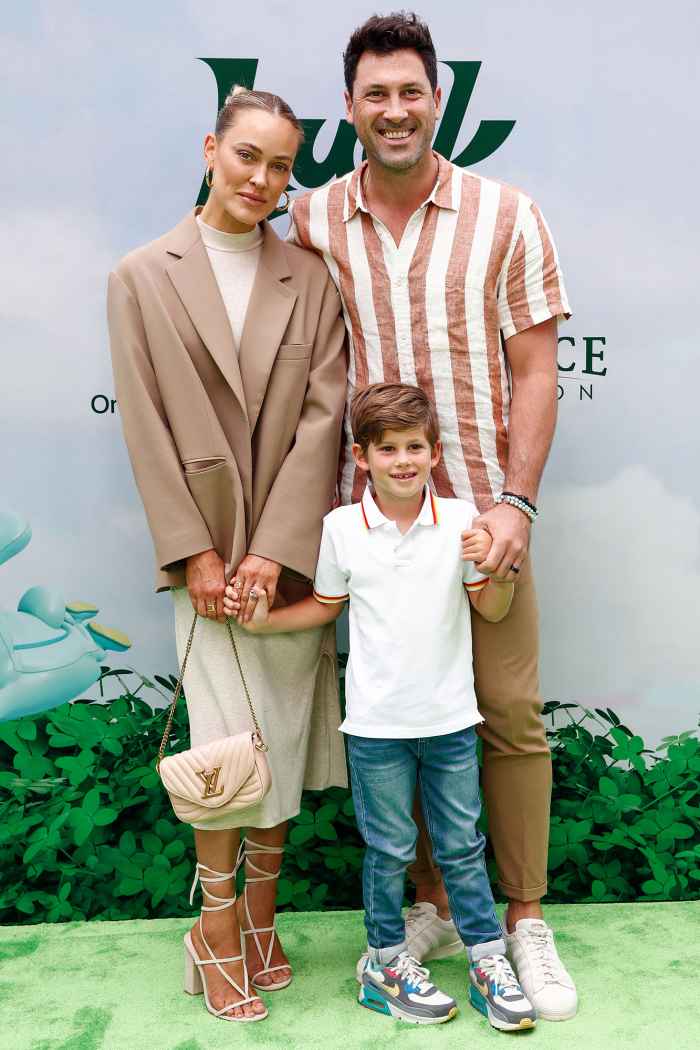 The New Zealand native gushed about how Chmerkovskiy handled their little one’s major milestone, saying, “He’s such a proud daddy right now. He’s on full daddy duty. There are no nannies and no grandparents around. It’s all him right now. So he’s doing a really good job.”

Murgatroyd’s return to the DWTS stage comes after she opened up in June about suffering three miscarriages in two years. That same month, the TV personality started to document her IVF journey on social media.

“Let’s normalize the conversations surrounding miscarriages and IVF and create an environment that is more comfortable for all women ❤️,” she wrote via Instagram at the time. “I love sharing stuff with you all, and well….this is me being as transparent as possible.”

Late last month, Murgatroyd discussed her planned IVF transfer, writing, “I promised you all that I would be open and honest. I had times where I was unsure of that decision throughout my IVF journey and even more so after we got the news that our transfer did not work. But going back on my word after being such an open book wouldn’t be right.”

She continued: “Life is funny though. When you think you got it figured out, it slaps you in the face and makes you start over. I keep learning that ‘Gods plans will always be more beautiful than all your disappointments’ … I have to keep believing that.”

Dancing With the Stars premieres on September 19 at 8 p.m. ET on Disney+.