From the time Jenny (not her real name) welcomed her youngest sister to the family eight years ago, she knew that one day, she would become a mother.

“Even though she’s my sister, she always felt like my kid as well. She made me realise that I want to be a mother,” said Jenny.

“But never did I think that I’ll be doing this alone.”

And definitely not at 19.

Jenny’s rollercoaster journey started in mid-January 2021 with two lines on a pregnancy test and an ultimatum from her father: No marriage, no baby.

“So if I wasn’t going to get married to my then-boyfriend, then I would have to get an abortion.”

Jenny’s mother, on the other hand, wasn’t quite on board with the idea of her oldest daughter becoming a mother on that side of 20.

Having experienced being a young mother herself, she felt that the physical stresses of parenthood would be too much for Jenny to handle at this age.

“​​So she said, like, ‘Do you know how tiring it is? You like to sleep so much. Do you know that with a baby, you cannot sleep at all?’ This I understand now. I totally understand.”

To Jenny’s mother, there was only one feasible option: Abortion.

The young couple decided to marry and keep the baby, but it wasn’t smooth-sailing.

In the lead up to their marriage, they fought daily.

Tensions mounted as they struggled to prepare for the arrival of their baby and, in essence, a new way of life.

Jenny surmised that it was the pressure of having to do so many things quickly, within a tight time frame, likening the baby to a “ticking time bomb”.

To make things worse, her then-boyfriend’s parents threatened to disown him and kick him out of the house if he didn’t leave Jenny and the unborn baby.

In the end, the couple decided to break up, abandoning their marriage plans.

And that was how, at 10 weeks pregnant, 19-year-old Jenny found herself on the verge of becoming a single mother.

“I chose to give birth to nurture”

Jenny briefly considered aborting the foetus growing inside her.

But she wasn’t completely comfortable with the idea.

“So many people can’t have kids, you see. Just because I am not in a position to have him as my child doesn’t mean that he cannot live,” she explained, adding that she also explored options like placing the child for adoption, in the early stages of her pregnancy.

Jenny’s decision to keep the baby after her boyfriend was out of the picture did not sit well with her father, who responded by kicking her out of the house.

As a single mother right now, Jenny often encounters people who don’t understand why she chose this path.

And while their responses aren’t as extreme as her father’s, they can be hurtful at times, she said.

Many people don’t understand Jenny’s decision to go through with the pregnancy and keep her baby. Photo by Carlo Navarro on Unsplash.

People would question why she didn’t abort and why she chose to let the child grow up in a single-parent family.

“The most hurtful, in my opinion, is that people don’t see that I’m saving a life and raising my own. People think that I am bringing a life into a painful world where nothing is ever going to be complete. So, like, give birth to torture. But I chose to give birth to nurture.”

A home away from home

Early on in her pregnancy, Jenny called a pregnancy hotline run by non-profit organisation Babes, which connected her with Safe Place, a local organisation which provides resources like temporary accommodation, baby essentials, and counselling services for pregnant women in need.

Thanks to Safe Place, Jenny had a roof over her head when she was kicked out of her house.

“Actually when I got kicked out of my house. I wasn’t so scared because I knew that Safe Place was there for me. It’s a bit gullible lah now that I think back. It’s a bunch of strangers telling you they are here for you, and you believe them, but they really were!” 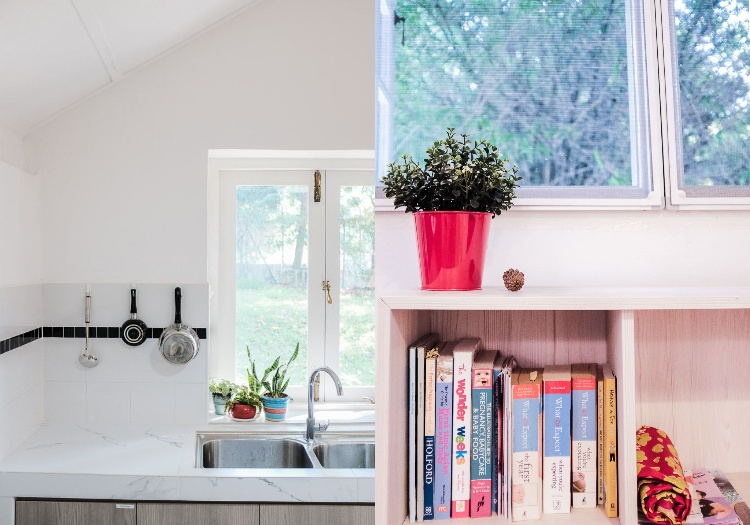 According to Jenny, Safe Place was more of a homely place instead of a crisis shelter. Images via Safe Place.

Aside from that, Safe Place prepared Jenny for childbirth and taught her the essentials of being a new mother through weekly classes.

“These educational sessions could be on anything from breastfeeding, to delivery, to afterbirth childcare and everything in between. So every week was like a different thing,” she recalls.

When Jenny encountered breastfeeding issues as a new mother, Safe Place even sent over a doula to help her “troubleshoot” them.

When she does not produce enough breast milk, the organisation sends over milk formula so that her baby doesn’t go hungry.

Bright sparks in a tough journey

Jenny spent only three months at Safe Place but the organisation’s care and generosity left an indelible mark.

She continues to receive support from Safe Place today.

As Jenny later found out — through her sisters — her parents were worried for her in her absence, and eventually allowed her to return home in May 2021 when a cluster of Covid-19 cases erupted near the shelter.

Back at home, they began to show that they cared for her.

They even accompanied her to the hospital where she gave birth to a healthy baby boy in September 2021.

She’s not the only one they are warming up to.

Jenny let on that her parents are starting to be more welcoming of her baby boy, offering to carry him and talk to him occasionally.

“They’re slowly opening up. So it’s one step at a time. Every day is a new step.” Her parents’ warming relationships with her son are bright sparks in an otherwise tough journey for Jenny. Photo by Aditya Romansa on Unsplash.

These warming relationships are little bright sparks in what is otherwise a tough journey ahead for Jenny, who has to handle the burden of parenting alone on top of growing into her role as a new mother.

One of her concerns — although it is very far from now — is how she would explain to her son why his biological father is not around.

“I cannot answer these questions yet, because I don’t know how. Like, how do you tell a person that they don’t have what they’re supposed to have? So I hope to learn more as time comes.”

Six months into her parenting journey, there is some semblance of stability in Jenny’s life — she has a roof over her head and her job as a Maths tutor provides some income — but still, it is exhausting (“I think the next time I take a break is when he’s, like, one, to be honest.”).

But she relishes it, even though her peers are on completely different paths — pursuing education and work.

“I don’t feel like if I don’t have my child, I could also be pursuing a degree. I feel like it doesn’t really matter.”

“Like, as of this moment that we’re talking, I feel very complete,” she mused, one hand patting her son as he dozed off quietly in her embrace. Top image by kevin liang on Unsplash. Quotes were edited for clarity.

This sponsored article by the Alliance for Action to Strengthen Marriages and Family Relationships made the writer think about how the wider society can be a safe place for pregnant women in need.