I know all too well what Kourtney is going through (Picture: Dimitrios Kambouris/Getty Images for The Met Museum/Vogue)

‘Are you pregnant?,’ my colleague said in front of four other people as we stood waiting for the lift. ‘You’re standing weird and acting quite weird too’.

I wanted the floor to swallow me up.

I’d recently had my first round of IVF and had gone through weeks of hormone injections, an egg retrieval operation, and an embryo implantation. My stomach was bloated and tender, and I felt vulnerable and anxious.

I was in the dreaded 10-day wait to see if the embryo implants into your womb and a pregnancy occurs. It’s agonising to say the least, but I had gone into the office where I was contracting at the time. I needed to keep myself busy and my mind on other things.

It didn’t take long for the first comment to be made.

After making my excuses, I spent the next few weeks catching team members looking at my mid-section and finding oversized outfits that wouldn’t cling to my rounded stomach.

I’d also put on a bit of weight due to the hormones, so I wasn’t surprised that people had their suspicions, but speculating about it at such an uncertain time was incredibly stressful for me.

Thankfully, that round of IVF was successful and resulted in my three-and-a-half-year-old eldest son. But it wasn’t for several more weeks and follow-up scans that I felt comfortable and confident enough with the pregnancy to tell colleagues at work.

Of course, once my son was born in the blistering hot summer of 2018, I soon forgot about these horrible memories of people asking me I was pregnant during the early stages of IVF.

But every now and then, something will remind me of that time and how very vulnerable it all made me feel. Often it’s seeing other women, even celebrities, in the same situation.

This happened very recently when I was watching the second episode of the Kardashian’s much anticipated Hulu series. Kourtney — the oldest of the Kardashian sisters — talks openly about undergoing IVF treatment, in hopes of having a baby with her new husband, Blink-182 drummer, Travis Barker. 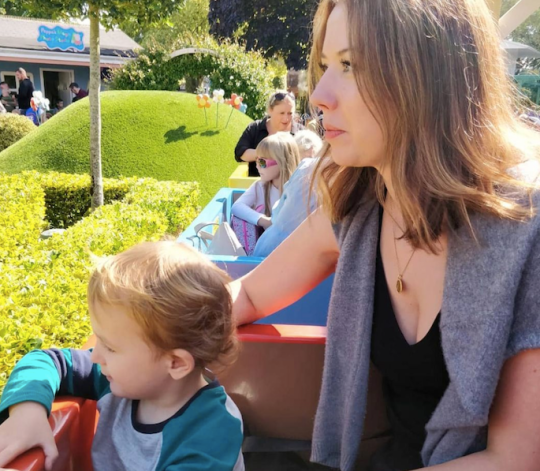 I always think it’s better to wait for news to be given, rather than demanding it (Picture: Catherine Hufton)

At the beginning of May, shortly after the episode aired, Kourtney posted a picture of herself on Instagram while holidaying in Lake Como, Italy. She’s wearing a skin-tight green dress and looks, in my opinion, sexy, curvaceous, and natural.

Unsurprisingly, the comments left on Kourtney’s Instagram post were largely about her body with followers commenting on her shape and weight in great detail.

Of course, this is nothing new for the Kardashians whose vast cumulative wealth has been earned off the back of their body image. But after such a personal revelation had been made about her IVF struggles, the comments felt particularly cruel.

I counted comment after comment of followers speculating on everything from the shape of her belly to the size of her boobs.

While our lives may be poles apart, I know all too well what Kourtney is going through.

My youngest son, who’s just nine months old, is the result of three rounds of IVF. The first round resulted in a miscarriage, the second didn’t work, and the third resulted in him.

To view this video please enable JavaScript, and consider upgrading to a web
browser that
supports HTML5
video

During this time, I put on around a stone in weight. My body had been made to feel like it was in the early stages of pregnancy for months, and I didn’t feel like myself at all. The levels of hormones I had been taking made me feel incredibly nauseous and sometimes it was tricky to just carry on normally.

If I’d have been pregnant, people would have understood but I couldn’t talk to people about IVF in the same way.

As a result, I hid myself away as much as possible. I didn’t want the questions, I didn’t want to hide the tablets I was taking every few hours, and I didn’t really want to talk about it.

I told a few people in my trusted circle, and I did this in order to be given a bit of space to get through it as best I could. I wanted my loved ones to know why I was being quieter, or why I might look a bit different. Not to be badgered for updates.

Fertility treatment takes everything out of you. It’s a physical and mental journey where you’re poked and prodded for weeks, if not months on end, not knowing if there will even be a baby at the end of it.

For many, including me, it also leads to some weight gain and a lot of bloating – something that Kourtney has talked about on The Kardashians.

I suspect that Kourtney Kardashian was open about her IVF journey – which has put on hold for now – in the hope that the public may be a little more sensitive when commenting on her pictures, while showing that it’s not as simple as some celebs will lead you to believe.

Of course, in the age of social media, there will always be people who comment unkindly and thoughtlessly, having absolutely no regard for how the person on the receiving end feels.

But no matter the circumstance, no one should ever be asked outright if they’re pregnant or not. They could be hoping and praying to get pregnant, they could have suffered multiple miscarriages, or they could just be a normal woman whose stomach, God forbid, appears a little bloated after a meal.

I always think it’s better to wait for news to be given, rather than demanding it. Being famous, or a Kardashian, shouldn’t make you exempt from that small courtesy.


MORE : Mum who spent more than £30,000 on IVF falls pregnant at the same time as surrogate


MORE : ‘Deceptive’ marketing and hidden costs: The truth about IVF and egg freezing


MORE : Parents who were successful with IVF are paying it forward – and have pledged to give £5k to fund a stranger’s treatment