Subway needs to cut that out!

Nerice Moyce, a 21-year-old woman from Suffolk, England said she ordered delivery from a nearby Subway two Sundays ago, and noticed something fishy the moment she picked up her tuna sub.

Moyce, who is 17 weeks pregnant, was horrified to find a giant knife right underneath her sandwich.

“I was with my partner and we got hungry. I am currently pregnant and always getting cravings so my partner went on his phone and ordered a Subway,” she told the Great Yarmouth Mercury. “I just opened it up and was like ‘hang on, what?’. We both sat there in shock.”

“My partner called Subway in Gorleston High Street and asked ‘have you lost one of your yellow knives. And he was like ‘Wait. Are you being serious, like actually?’” She recalled.

Moyce posted a video of the Subway order to her Facebook page. In the video she lifts her food to reveal the giant knife peeking out from beneath her sandwich. Her Facebook friends were quick to point out what a danger the situation could have been.

“Irresponsible and dangerous how many others have found [knives] in under their food don’t take no bull from them,” wrote Jill Lock.

Moyce is happy nobody got hurt, and wondered what might have happened and the knife landed in the wrong hands.

“Straight away I was like, ‘imagine if a young child or a teenager had found it’. I am glad that it came to me,” she said.

Moyce said Subway has yet to apologize, and she still has the knife at her home. She told the Great Yarmouth Mercury that she received a message from Subway’s Instagram account stating they would speak to the restaurant and contact her in the following days. The Post reached out to Subway for comment. 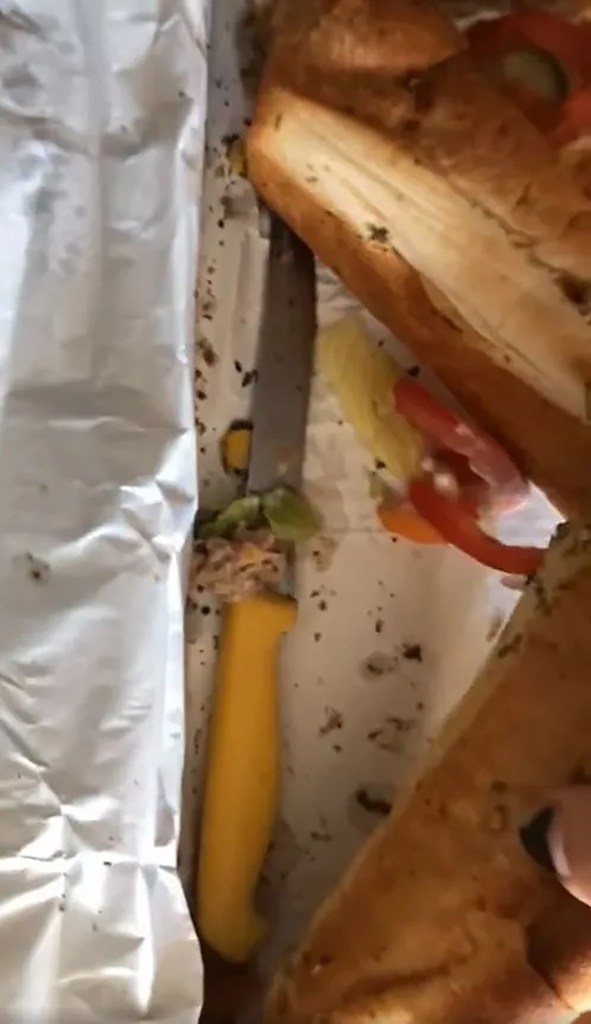 Moyce said Subway has yet to apologize, and she still has the knife at her home. @nerice.flatt