In this study, vaccination coverage data of the past 20 years were extracted from the World Health Organization (WHO) and United Nations Children’s Fund (UNICEF) Estimates of National Immunization Coverage (WUENIC).

The findings revealed a global decline in DTP3 coverage of 2.9% from an expected 89.2% to a reported 86.3% across 167 reporting countries. Similar low coverage was last recorded in these countries in 2005 and demarcated a 15-year setback in RI progress. 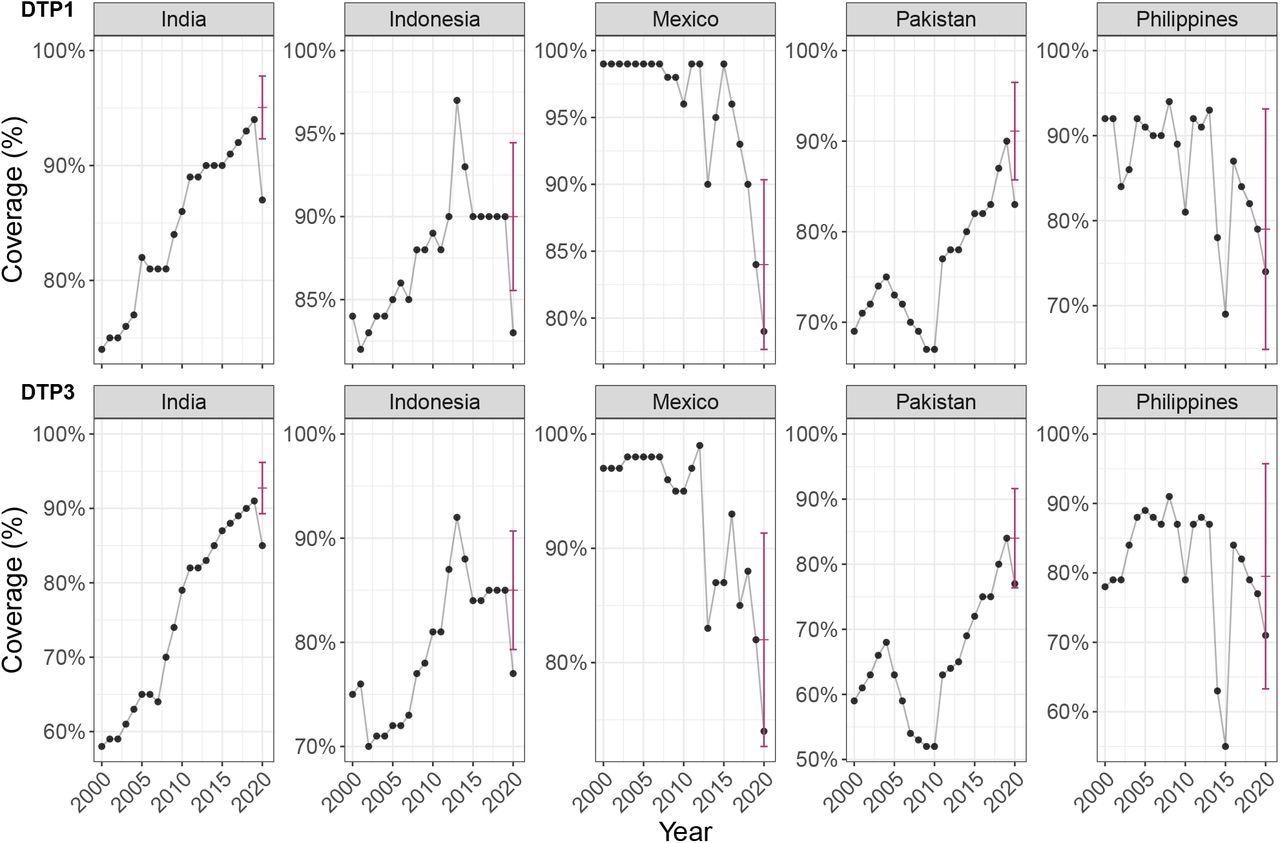 Expected and reported 2020 vaccine coverage for DTP1 and DTP3: example of five countries with most additional missed DTP3 immunizations in 2020. These graphs show WUENIC-reported coverage data (black dots) and the corresponding ARIMA predictions and the associated 95% confidence intervals (red bars).

For DTP1, the average global coverage decline was 2.2% – from an expected 92.9% to a reported 90.7% across the 167 countries. This signified increases in the quantity of ZD children in some countries – this suggested that the most vulnerable populations have been strongly impacted by the reductions in RI observed in the first year of the pandemic. Hence, the current pandemic has widened the gap between people with limited healthcare access. 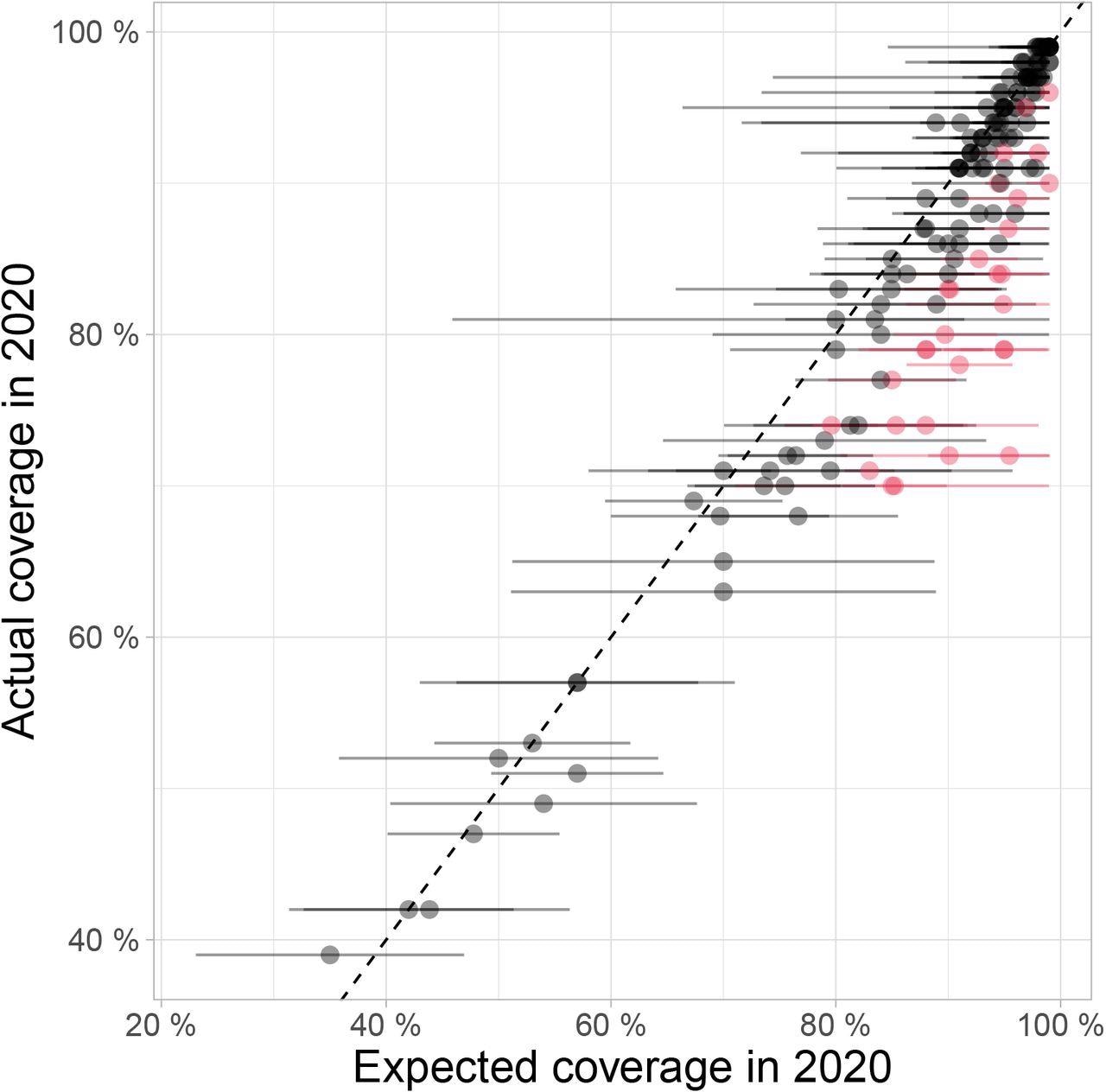 Comparison between 2020 WUENIC-reported DTP3 coverage and expectations derived from historical trends. This scatterplot shows country coverage (WUENIC-reported actuals and ARIMA-predicted expectations) as dots. Lines around individual points illustrate the 95% confidence intervals (CI) of ARIMA predictions. Countries showing significant departure from expected values, i.e., for which actual coverage is outside the 95% CI of predictions, are indicated in red.

Furthermore, regional differences remained after accounting for differences in income groups; however, the converse wasn’t true. India estimated 3.5 million unvaccinated children for DTP3 in 2020, of which 52% were associated with the pandemic disruption. There were 1.1 million missed DTP3 vaccinations in Indonesia, of which 35% were associated with RI coverage declines in 2020. Besides, similar trends were observed for ZD children using DTP1 results.

Nonetheless, this study’s estimated changes in RI coverage suggest a smaller global decline than previously found. Moreover, these findings may be more robust owing to a more comprehensive dataset including data from more countries.

The findings indicate a greater risk of vaccine-preventable disease outbreaks in the near future, especially in the absence of Supplementary Immunization Activities (SIAs) to reach missed children. In addition, ZD populations in key ZD “hotspots” – India, Pakistan, and Indonesia, are estimated to have increased significantly in 2020, posing a genuine public health threat.

Differences between expected and reported DTP3 vaccine coverage in 2020 across (A) UN regions and (B) income groups Points represent individual countries, grouped, and colored according to (A) UN region classification and (B) World Bank income groups. Country coordinates on the X-axis were jittered for visibility. Values on the y-axis are indicated as absolute differences between reported and expected vaccine coverage, in percentages. Boxes show the median (50%), upper (75%) and lower (25%) quartile changes in coverage for each group, with whiskers extending to either the minimum/ maximum changes or the quartile value plus 1.5 times the interquartile range, and crosses indicating the average. The black dashed horizontal lines indicate no change in coverage. LIC: Low-income Country. LMIC: Lower-middle-income Country. UMIC: Upper-middle-income Country. HIC: High-income Country

It was suggested that to alleviate such risks and reduce immunization inequities, SIAs should be targeted towards populations who have limited access to healthcare and encounter vaccine deprivation. In addition, future research should investigate heterogeneities in RI decline at finer scales and identify subpopulations that may have experienced even greater losses to RI coverage.

It was also stated that RI disruption might be worsened by the acceleration of COVID-19 vaccination campaigns, particularly in low- and middle-income countries, potentially competing with RI services. Therefore, careful monitoring is essential. Further studies are needed to understand which factors linked to the COVID-19 crisis impacted vaccination coverage to successfully and efficiently address pandemic-associated losses to coverage.

The findings of this study render a transparent and replicable rationale for estimating lapses in RI coverage across countries, producing an objective measure for missed immunizations and coverage disruptions. The results may serve as a basis for identifying countries most affected by declines in RI coverage and prioritizing efforts to modulate the indirect impact of COVID-19.