As of December 28, 2021, over 282 million people have been infected with the severe acute respiratory syndrome coronavirus 2 (SARS-CoV-2) worldwide, of which over 5.4 million have died. In children, SARS-CoV-2 infection is usually asymptomatic or mild, which is in contrast to older individuals, who are associated with a greater risk of hospitalization and death.

This variation in how age determines an individual’s response to SARS-CoV-2 has increased the interest of researchers in learning more about the immunological response to this virus in children. To this end, several studies have observed lower antibody and cellular responses in children as compared to adults, as well as a lack of nucleocapsid-specific antibody responses during or shortly after infection.

In a recent Nature Immunology study, researchers provide a comprehensive characterization of the convalescent humoral and cellular immune responses of 91 primary school-aged children and compared these responses to 154 adults participating in the coronavirus disease 2019 (COVID-19) surveillance in school KIDs (sKIDs).

Herein, the authors show that children have a significantly different immune response profile after SARS-CoV-2 infection than adults. These findings could have implications for understanding protective or pathological immune responses to infection in children, as well as assist in guiding and interpreting COVID-19 vaccination regimens for children.

In the current study, antibody responses to viral proteins were largely similar in seropositive children and adults. However, geometric mean antibody titers against all four areas were larger in children, with the N-terminal domain (NTD) and receptor-binding domain (RBD) showing 2.3-fold and 1.7-fold increases, respectively, though these did not achieve statistical significance. Unlike earlier findings, the authors found antibody responses to nucleoprotein, with a 1.3-fold higher antibody titer in children than in adults.

Cross-reactive neutralizing antibodies have been observed in SARS-CoV-2-seronegative children, which suggests that pre-existing immune responses to seasonal coronaviruses may influence clinical outcomes following primary SARS-CoV-2 infection. As a result, the researchers compared antibody levels against the four hCoVs in children and adults who were seronegative and seropositive for SARS-CoV-2.

The authors also looked at antibody titers against influenza subtypes and respiratory syncytial virus in relation to SARS-CoV-2 serostatus to see if this effect was exclusive to hCoV or a more general effect of SARS-CoV-2 infection on antibody responses against heterologous infection. 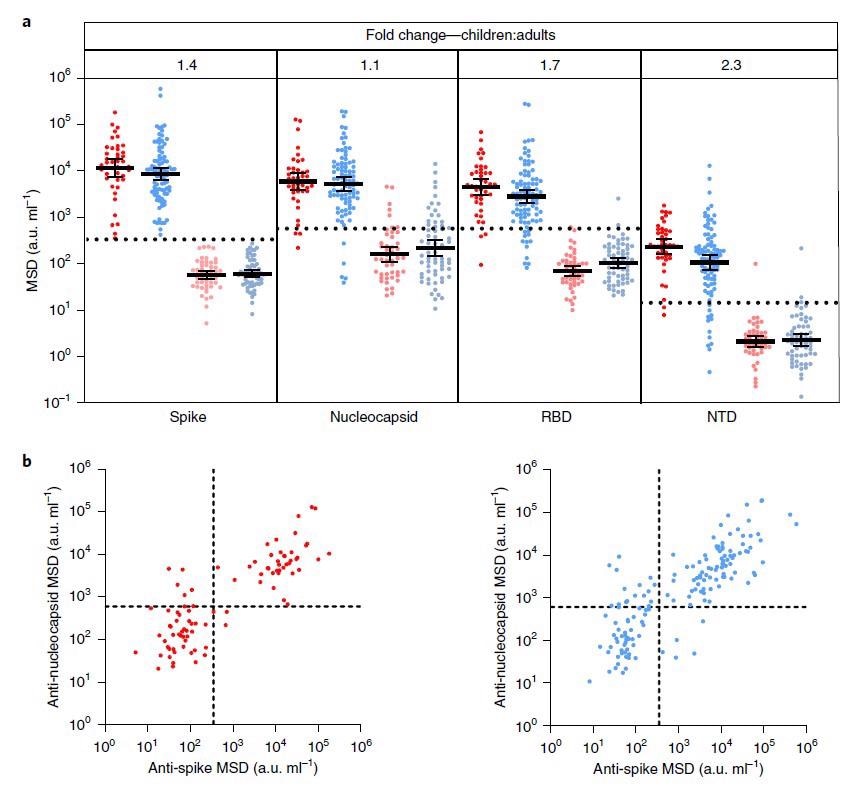 Children and adults develop coordinated antibody responses to SARS-CoV-2. a, SARS-CoV-2 antibody levels measured by MSD assay in
children (n = 91) and adults (n = 154). Serostatus was assigned based on spike serology and used to divide the cohorts into seropositive (red/blue) and
seronegative (light red/light blue) (seropositive/negative children n = 43/48, adults n = 91/63, respectively). The dotted lines represent cutoff values for
serostatus. Fold change indicates the difference between the GMTs in seropositive children and adults. The bars indicate the geometric mean with 95%
confidence interval (CI). b, The level of the spike- and nucleocapsid-specific antibody response was correlated within individual donors and revealed a
coordinated response to both proteins. a.u., arbitrary unit.

In both children and adults, no change in antibody titers against these viruses was observed. These findings suggest that SARS-CoV-2 infection enhances humoral responses against hCoVs in children.

Following the increase in hCoV-specific antibody titers in children after SARS-CoV-2 infection, the authors investigated whether this was cross-reactive with SARS-CoV-2 or if it was an hCoV-specific response. As a result, plasma samples were pre-absorbed with recombinant S1 or S2 domain protein from SARS-CoV-2 before antibody levels to both SARS-CoV-2 and the four hCoV subtypes were measured.

Antibody titers against the whole spike protein were significantly reduced after pre-absorption with both the S1 and S2 domains. RBD- and NTD-specific antibodies against SARS-CoV-2 were absorbed by the S1 domain but not the S2 domain, with no effect on the nucleocapsid-specific binding for either domain.

The S1 domain had no effect on antibody binding to any of the four hCoV subtypes, thereby indicating that cross-reactive antibodies against this domain are unlikely. Comparatively, the S2 domain inhibited antibody binding to OC43 and HKU-1. In the case of the alpha coronaviruses NL63 and 229e, no such effect was detected.

The results from this study showed that children display a characteristically robust and sustained adaptive immune response against SARS-CoV-2 with substantial cross-reactivity against other hCoVs. This is likely to contribute to the relative clinical protection in this age group; however, these findings may also provide insight into the characteristic immunopathology that may develop. Ultimately, the results of the current study help to guide the introduction and interpretation of vaccine deployment in the pediatric population.

Talking to children about race and racism: An age-by-age guide – CHOC