Days after mom-to-be Alia Bhatt took to social media to say a little something about her pizza cravings, actress Shilpa Shetty has come to her rescue. The latter decided to turn Alia’s Sunday into a day full of tasty delights. Shilpa sent a delicious pizza to the mom-to-be and the Brahmastra actress’ reaction is priceless.

Alia took to social media to share a photo of the pizza sent by Shilpa and along with it, her verdict of the delish meal. “Thank you my dearest @theshilpashetty for this yummy yummy pizza.. best I have eaten!!!!!” wrote Alia on her Instagram Story. 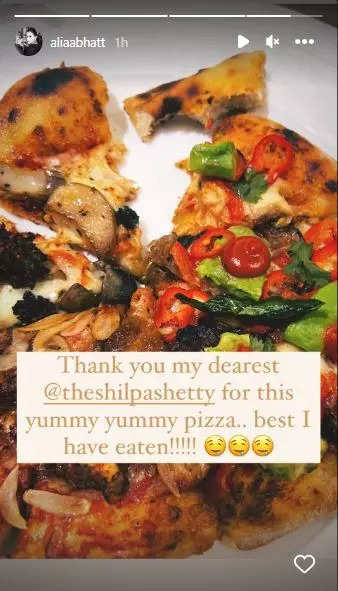 For those unaware, Alia, who is expecting her first child with husband Ranbir Kapoor, had revealed she was craving a pizza a while ago. “Guys, what’s the best pizza place in Mumbai? Craving (slew of laughter emoticons)” she wrote on her IG story a few days ago.

The actress got married to Ranbir in April this year and ever since, the duo’s photos and videos are all fans can talk about. The mom-to-be has been out and about the city for work-related commitments and fans can’t stop gushing about Alia’s dedication to her work.

Alia and Ranbir have been promoting their recently released film, Brahmastra Part One: Shiva. Apart from Alia and Ranbir, the film also stars Shah Rukh Khan, Amitabh Bachchan, Mouni Roy and Nagarjuna Akkineni in pivotal roles. Next up, the actress will also be a part of Karan Johar’s Rocky Aur Rani Ki Kahaani with Ranveer Singh and Farhan Akhtar’s Jee Le Zaraa with Priyanka Chopra and Katrina Kaif. Alia is also set to enter Hollywood with Heart of Stone, co-starring Gal Gadot.