He recently revealed that he wanted to expand his bustling brood with a sixth child.

And preparations at Jamie Oliver’s family pile would appear to be well under way, with the TV chef winning approval to add an extra three bedrooms to the six-bed Elizabethan mansion.

Plans reveal Oliver, 46, and wife Jools intend to renovate the old servants’ quarters of the grade I-listed country home to ensure it is ‘fit for modern family life’.

The Olivers have already carried out extensive renovation and restoration at Spains Hall since buying it in December 2018.

The latest work appears to have been prompted by the couple’s desire for a new brother or sister for Poppy, 19, Daisy Boo, 18, Petal Blossom, 12, Buddy Bear, 11, and River, five.

Mrs Oliver, 47, revealed in August that she was considering having IVF to try for another baby after enduring five miscarriages.

She told a baby loss and infertility podcast: ‘I have thought about IVF because having researched it and spoken to some amazing people, it seems like the right option for my age.’

However, she admitted: ‘It’s hard because also I’ve got a partner you know, I’ve got to think about him. I’m not so sure he’s that keen to do it that way. So I don’t want to push anything, because I’m very lucky.’

Around the time of River’s arrival Oliver told how he had been on the verge of having a vasectomy – only to back down over his fear of needles and because his wife refused to let him go ahead.

He told TV host Alan Carr he had also been put off by a friend who had recently had the ‘snip’ – and ‘cried for three weeks’.

He joked about how having such a large family was ‘completely nuts’, but added: ‘It’s an amazing thing… I love the kids and it keeps me grounded.’ The children featured in last year’s Keep Cooking: Family Favourites, which was filmed largely at the mansion in Finchingfield, Essex.

The Channel 4 series showed off the architecture and landscaping of the historic property, which was built in 1570 but added to over the next three centuries.

The Olivers, who have been married for 21 years, bought the home for £3million. The manor has a great hall, library, wine cellar, tennis courts and outdoor swimming pool and is set in gardens which are also of historic value and are listed separately as Grade II*.

Plans for the latest work approved by Braintree District Council show the family intend to modernise the second floor, which comprises six disused rooms. Alterations to the space above the great hall – originally used for servants and guests – will see the creation of three bedrooms, two bathrooms, three dressing rooms and a cloakroom.

One of the designs drawn up by Kay Pilsbury Thomas Architects shows a luxury bathroom, complete with his-and-hers wash basins and a stand-alone bath in the centre of the room. 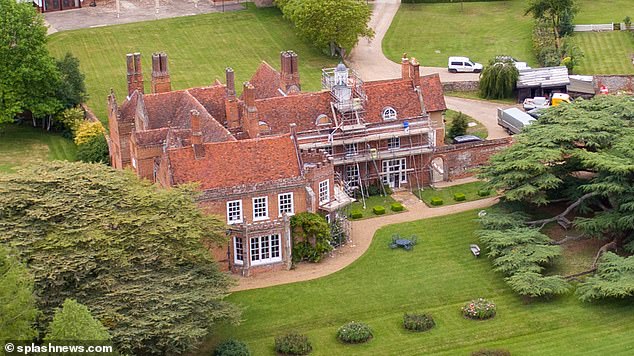 The family’s 16th century home Spains Hall in Essex. The Olivers, who have been married for 21 years, bought the home for £3million

The planning application includes a number of references to the historical importance of the property, with a statement submitted alongside the drawings saying the renovations ‘are not considered to detract from the character or special architectural interest’ of the building.

‘The works will have a beneficial impact,’ it adds. ‘Extending heating, plumbing and services fully to the second floor will ensure this part of the house is equipped to deal with modern family life.’

According to designs seen by the Mail, wallpaper in all the bedrooms will be kept and restored, with replicas made if needed.

Before the Olivers moved in, the property – which is based on the structure of an earlier, medieval house – had only ever been owned by three families, and had last been sold 250 years ago.

Estate agents say Spains Hall has ‘the potential to become one of the grandest houses in Essex’.

‘The planning is good for the house. It gives it an extra lease of life and sets it up for the next 50 to 100 years.’