The severe acute respiratory syndrome coronavirus 2 (SARS-CoV-2), which is the causal agent of the coronavirus disease 19 (COVID-19), is highly transmissible and infectious. Schools are one of the hotspots for the spread of this virus, as they bring together children from several different households.

In the United States, K-12 schools have been opened in some counties; however, there is limited data that has determined whether the reopening of schools has contributed to a rise in COVID-19 cases.

A new study published in the Proceedings of the National Academy of Sciences finds that counties that opened K–12 schools experienced a significant increase in the growth rate of cases. The current study also documents stronger effects for counties where mask-wearing was not mandatory.

How does the opening of schools relate to the spread of COVID-19 infection? Are barrier strategies, such as mask-wearing at school, effective? These are two highly important questions, especially for countries that have low vaccination rates.

Scientists are studying these questions with renewed rigor, owing to the rapid emergence of highly infectious SARS-CoV-2 variants. If it could be established that school openings causally lead to a surge in cases, school authorities should take immediate steps to rectify the situation, such as implementing social distancing measures and mask mandates. The government could also prioritize vaccination for elderly parents.

The sample period for this study was from April 1. 2020 to December 2, 2020. Several outcome variables were used for the analysis, which included weekly cases and deaths, as well as their growth rates. The key independent variables were school openings and data on mitigation measures data.

The dynamic panel data regression model also included other variables, such as the number of tests and non-pharmaceutical policy interventions (NPIs). A seven-day moving average of variables was used to deal with periodic fluctuations.

In the current study. The researchers first conducted a preliminary event study analysis before estimating a dynamic panel regression. The event study results illustrated that the gap in cases/deaths per week per 1,000, between remote opening and full/hybrid opening, grew over time.

Researchers also observed that deaths and cases increased in counties with in-person or hybrid openings to a greater extent as compared to those with remote openings. These results were stronger for counties without any mask mandate for staff. 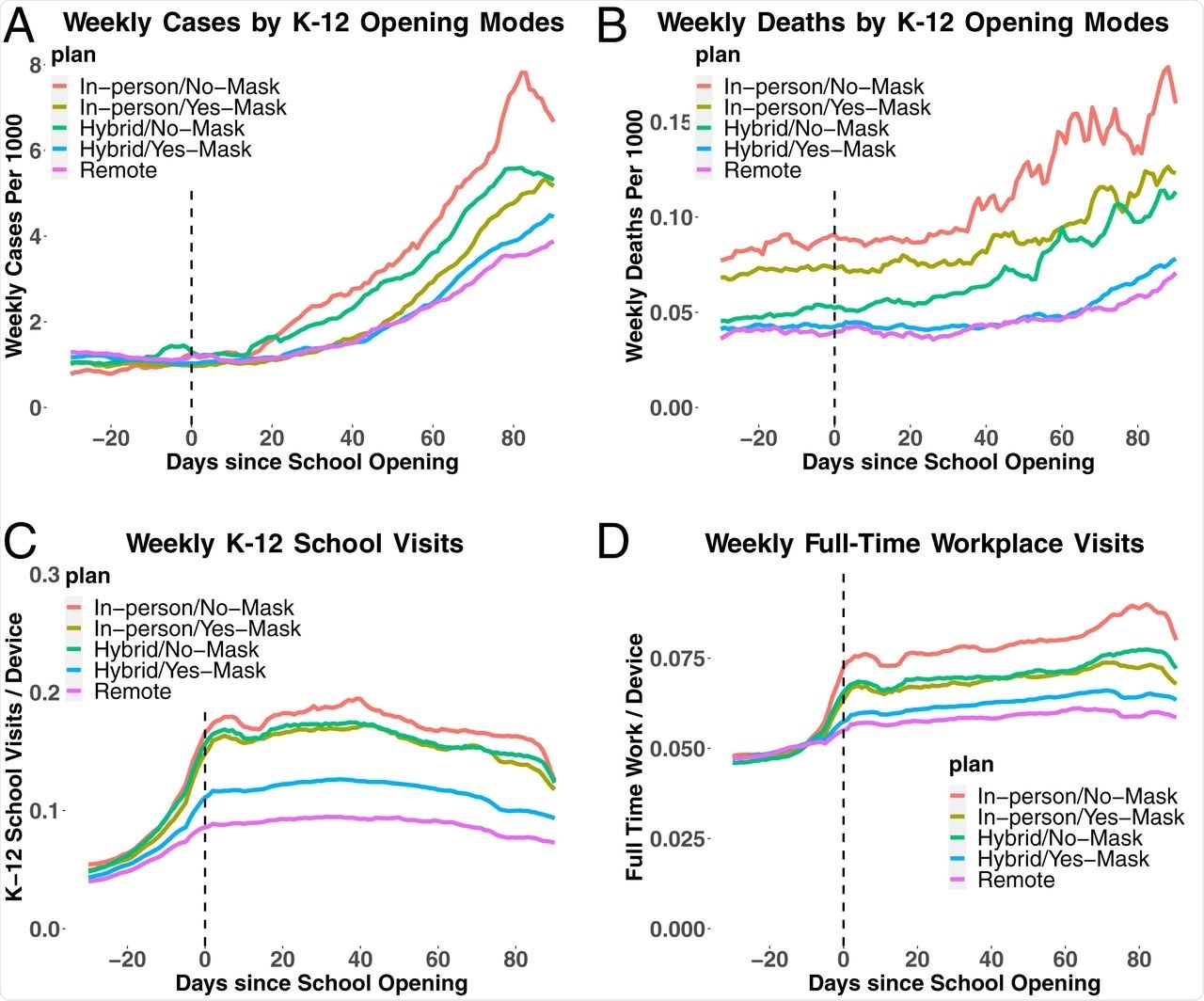 The evolution of cases, deaths, and visits to K–12 schools and restaurants before and after the opening of K–12 schools. A and B plot the evolution of weekly cases or deaths per 1,000 persons averaged across counties within each group of counties classified by K–12 school teaching methods and mitigation strategy of mask requirements against the days since K–12 school opening. We classify counties that implement in-person teaching as their dominant teaching method into “in-person/yes-mask” and “in-person/no-mask” based on whether at least one school district requires staff to wear masks or not. Similarly, we classify counties that implement hybrid teaching into “hybrid/yes-mask” and “hybrid/no-mask” based on whether mask-wearing is required for staff. We classify counties that implement remote teaching as “Remote.” C and D plot the evolution of the 7-d average of per-device visits to K–12 schools and full-time workplaces, respectively, against the days since K–12 school opening using the same classification as in Aand B.

The authors of the current study also found no evidence of the association between school opening dates and visits to restaurants, bars, churches, etc. This suggested that other confounding factors, such as lockdowns, were not systematically related to school opening times and mitigation measures.

The event study, though intuitive, had some limitations, such as the parallel trends’ assumption not holding and the fact that it did not capture the changes in the transmission that were influenced by other containment policies and behaviors. Owing to these limitations, the researchers next adopted a dynamic panel data approach.

The results of the dynamic panel data were in line with those of the event study. The researchers estimated that an increase in the visits to and opening of schools was associated with an increase in the growth rates of cases, with a 2-week lag, when schools did not implement a mask mandate for staff.

In terms of quantities, the full opening of K-12 schools could have contributed to a 7% increase in the growth rate of cases. The results also suggested that schools with remote learning modes were associated with lower case growth. These results are consistent with other studies on COVID-19 that showed the importance of mitigation measures in schools.

The current study examined whether the opening of K-12 schools could increase the spread of SARS-CoV-2. One of the limitations of the study is its observational nature.

The researchers also stated that the potential presence of unobserved confounding factors could invalidate causal results; therefore, the results should be interpreted with great caution.

It must be highlighted that the researchers controlled for a host of confounding factors, such as mitigation policies and past infection rates; however, there may be other factors impacting the results, such as the attitudes of people. These factors could be correlated with school reopening decisions, beyond controls added to the regressions.

A second limitation of the study is related to the quality and availability of data. Children and adolescents are less likely to be tested; therefore, the reported number of cases is likely to underestimate the true COVID-19 incidence.

County-level testing data would have been valuable; however, these were not available. Despite the limitations, the results obtained in this analysis strongly support masking and other precautionary policies in schools, as well as prioritizing vaccines for education workers and elderly parents/grandparents.

Is there an association between parental education level and the risk of malnutrition among children?