Since the coronavirus disease 2019 (COVID-19) pandemic was declared in March 2020, testing for this infection has been a linchpin of efforts to contain virus transmission by isolating confirmed cases and quarantining suspected contacts. A new study published on the preprint server medRxiv* explores the success of testing efforts among children and adolescents in Australia, which has seen some of the tightest controls in the world against the spread of the severe acute respiratory syndrome coronavirus 2 (SARS-CoV-2).

Young people tend to have among the highest rates of social interaction among all age groups due to their natural effervescence, love of action, a wide network of peers, and involvement in a range of social activities. In this context, this population has been advised to slowly shift back into pre-pandemic lifestyles, while continuing to use masks, be in well-ventilated indoor areas or remain outdoors while interacting with others outside the household, and observe hand and face hygiene.

Young people remain largely unvaccinated due to the very low rates of serious disease among them, and the prioritization of high-risk groups for vaccine-derived immunity. However, this population often works multiple jobs, meets many more people daily, and lives with many others at home. As a result of these factors, younger people are more vulnerable to infection and more likely to transmit it given their largely asymptomatic status.

Therefore, testing is a standard strategy for this age group. While some workplaces or travel regulations may insist on regular testing, most other social settings rely on voluntary compliance with testing/tracing/quarantine norms implemented as required.

The need for young people to return to school and work is obvious, with almost a third of young Australians reporting severe mental difficulties during the pandemic period in June 2021. Not only do these individuals acquire “book learning” and academic skills, but their broadened horizons of interaction and social learning from role models outside the home are important aspects of formal schooling.

While approximately half of Australians describe themselves as willing to be tested if they had mild symptoms related to a respiratory infection, about a quarter of the daily tests have been in young individuals between the ages of 10-29 years.

In the current study, multiple predictors were considered to assess their contribution towards willingness to test for COVID-19. This included social, demographic, and virus-specific factors using data from the Longitudinal Study of Australian Children (LSAC). The observed associations are not causal but may be used to frame hypotheses about the causality for further research.

The current study included approximately 2,300 young people, of which 60% were 16-17 years old. Three-quarters of the study participants were from urban centers, 57% had studied up to secondary level and the same percentage being employed part-time.

About 75% of study participants lived in families with three or more members, while almost 90% lived with their parents. Of the latter, over 60% were aged 16-17 years of age. About 70% were from underprivileged backgrounds and about 30% were already in a relationship. 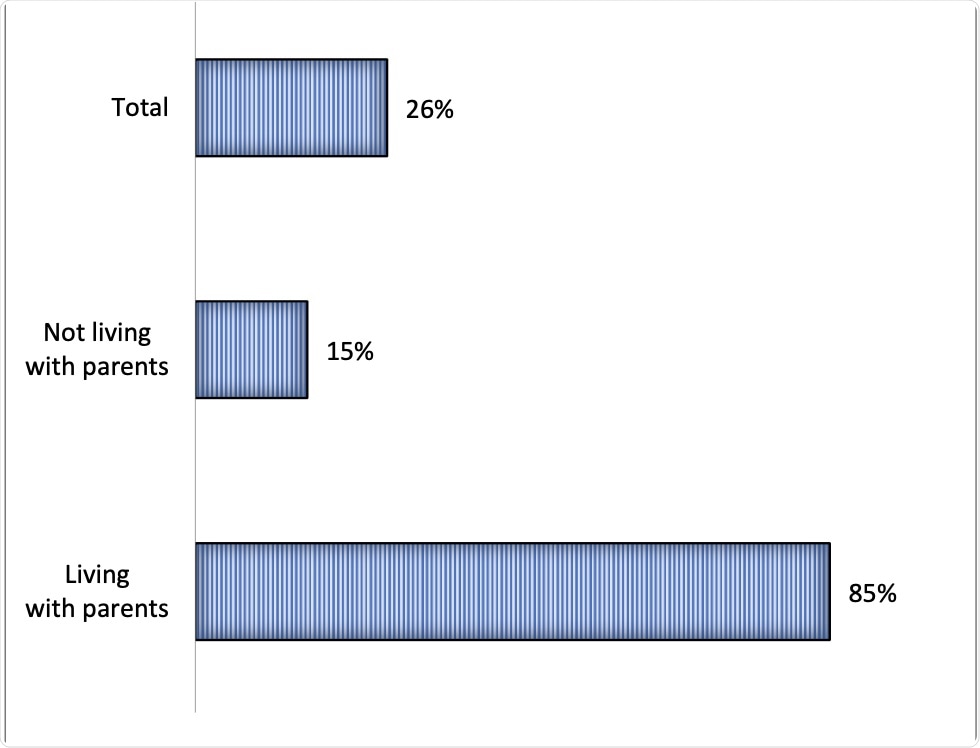 Percentages of youth been COVID tested, stratified by living with and without parents.

Over half of the participants were unemployed during the period of pandemic-related restrictions, and most lived with the same household throughout. More than 80% of these individuals did not receive any financial help because of the pandemic.

The odds of getting tested for COVID-19 were 80% higher for young people living in large cities, regardless of the type of household. This turned out to be the strongest predictor of testing.

Those who were living in a household that had changed during the pandemic were also more likely to get tested, among those still living at home, with 33% higher odds.

The lack of household unity was also associated with five-fold higher odds of testing in this group as compared to those living in a household with cohesion.

The current study demonstrates that young people staying at home are the most likely to get tested, especially if the household composition changed. This could be due to parents taking care of their children, especially looking for COVID-19 symptoms and encouraging such children to get tested, besides transporting them to testing centers.

Again, if a family comprised other members than the parents and children, parents tended to encourage more testing. This was also the case if the family came into constant contact with people at high risk, including their own relatives, indicating a socially responsible motive.

The highest odds were among those living in a large city. Other factors associated with higher testing rates were having non-cohesive households with children living outside and households with two or more members. This might indicate a protective measure by the young people to protect their families during visits, perhaps because they could not trust their family members to do so.

Interestingly, there was an increase of almost 40% in disputes before the Family Court of Australia related to parenting. These could conceivably be disagreements about the degree and nature of compliance with pandemic restrictions.

When the household underwent changes, with young people joining one or more new households, other family members of the new household might want the children to be tested beforehand so as to avoid infecting others in the family.

Urban young people likely resided in more crowded areas and had more social contacts, as reflected by the increased testing rates in both situations. This population also had more access to testing. This urban-rural divide represents an issue to be solved with poor, remote, and less healthcare-accessible populations, as well as one with more underlying illnesses.

“Our study revealed young people have been very good at getting tested for COVID.”

The majority of the participants in this study were from poorer backgrounds; therefore, future testing may be unattractive to them since it may entail cutting off social contacts, especially after they are vaccinated. Such individuals may be vaccinated, asymptomatic, or only mildly symptomatic, which means they have reason to think testing to be redundant and may therefore shy away from isolating themselves, or fear putting potential contacts into isolation.

“Basic survival needs of individuals and families often outweigh other consideration in healthcare decision-making. To further incentivise testing in this age group, we should consider providing this age group with continued financial and social support while awaiting the outcome of the test and during any isolation.”

medRxiv publishes preliminary scientific reports that are not peer-reviewed and, therefore, should not be regarded as conclusive, guide clinical practice/health-related behavior, or treated as established information