A newlywed mum-to-be has revealed the strange symptom that led her to be diagnosed with breast cancer during her third trimester.

Nancie Allen, 32, started experiencing pain like a burning match being pressed into the underside of her right breast, through her skin and deep into the tissue.

She was 25 weeks pregnant at the time and had enjoyed a ‘dream run’ with no morning sickness or pain.

Nancie Allen, 32, pictured with husband Ryan, 29, was diagnosed with breast cancer while 25-weeks pregnant with her first child

Alarmed, she checked her breasts for lumps, but couldn’t feel anything out-of-place.

‘I thought it could be a blocked milk duct or something, but went to the doctor straight away just in case,’ she told FEMAIL.

Nancie has always been mindful of checking her breasts after her grandmother died of the cancer aged 47.

She knew what to look out for – lumps, inverted nipples, pus or discharge and changes in the appearance of her skin.

‘Breast cancer isn’t supposed to hurt, that’s what they always say,’ she said.

‘But I am so lucky that it did because there were no other symptoms and I wouldn’t have found it so early.’

Doctors were equally worried about the odd sensation described by Nancie, so they sent her to have an ultrasound and the screen lit up.

‘It was a nasty looking thing on the screen,’ she said, noting her heart dropped and she ‘just knew it was cancer’.

Three biopsies later and it was confirmed, she had triple-negative breast cancer, an aggressive form of the disease which doesn’t react to hormones.

‘I am so happy because I am pregnant and we are having a son and I am scared because of this cancer,’ she said.

At first Nancie was against having chemotherapy while pregnant because she didn’t want to harm her unborn child in a bid to save herself.

The cancer is the large black mass in this picture, outlined with the letters A and B. It didn’t ‘feel like a lump’ and the only symptom was a burning sensation

What are symptoms of breast cancer?

* Changes in size or shape of breasts

* Changes to the skin including dimpling, a rash or puckering of the breast

* Inflamed breast where your breast may look red or swollen

* A red, scaly rash on the breast

But doctors convinced her to try a baby-safe version of the treatment – which she will continue until her son is born.

‘I also spoke to mums who had chemo while pregnant and their babies are thriving, so that made me feel a lot better.’

The treatment should slow or stop the growth of the cancer, giving the school teacher a good chance to beat it with more aggressive therapies once her baby comes. 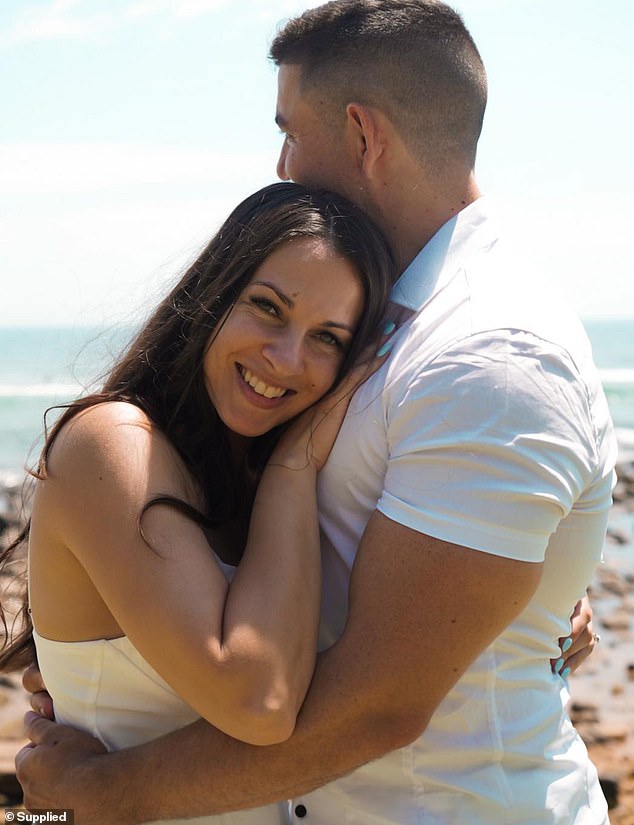 Nancie’s grandmother died of cancer aged 47, so she has always been vigilant about checking her breasts – but the typical symptoms never showed

‘When I went in this morning, the ladies at the hospital door handing out masks were like “so do you need directions to maternity” and I said “no I’m having chemo” and they gasped,’ she said.

Nancie is now 29-weeks along in her pregnancy and has stopped working to undergo four rounds of chemotherapy before her baby is born.

‘It isn’t recommended that women work if they are having chemo while pregnant,’ she said.

‘We want the baby to come as close to full term as possible, that means past 37 weeks, so I have to take it easy.’

The mum wants women to make checking their breasts a priority and says it should be done every month. 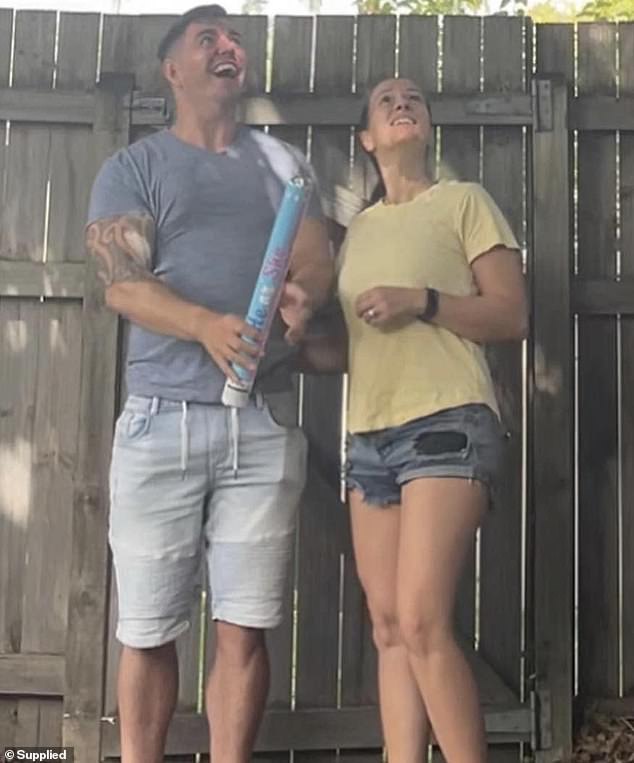 ‘I am so grateful I took the burning feeling seriously and that my doctor did too. Women need to make sure if they are in doubt they see a doctor.’

The 32-year-old works as a personal trainer on the side and is extremely health focused – she says she would ‘never not go to the doctor’ but realises most women would dismiss the odd symptom after a quick Google search.

‘I couldn’t find any information or descriptions which sounded right but got it checked as soon as possible anyway,’ she said.

By the time the burning sensation began the cancer had already spread to her lymph nodes.

The strange symptom also disappeared after about three weeks – which means she is now back to having no symptoms of the disease despite its rapid growth.

Nancie will undergo a different form of chemotherapy after the birth of her first child, the drugs used then will be much harsher than the treatment she is currently on.

How to self-examine your breasts:

Step 1: Begin by looking at your breasts in the mirror with your shoulders straight and your arms on your hips.

Here’s what you should look for:

If you see any of the following changes, bring them to your doctor’s attention:

Step 2: Now raise your arms and look for the same changes

Step 3: While you’re at the mirror, look for any signs of fluid coming out of one or both nipples (this could be a watery, milky, or yellow fluid or blood)

Step 5: Finally, feel your breasts while you are standing or sitting

Many women find that the easiest way to feel their breasts is when their skin is wet and slippery, so they like to do this step in the shower

Breasts should be examined monthly

She will also have tests to see if she carries the breast cancer gene and be scheduled for a lumpectomy or mastectomy depending on the outcome.

Because the cancer has spread to her lymph nodes she will also have those removed as part of her post-partum treatment.

Her husband Ryan, 29, will take time off job as an insurance broker to look after Nancie and their baby.

‘I won’t be able to be at home alone with our baby because I might be too tired after chemo, or have too many side effects,’ she said.

The couple have started a Go Fund Me to help them get through the year financially.

‘We will spend the money on baby supplies and medical expenses and also things like rent if we have to take even more time off work,’ she said.