The Covid vaccines are safe and effective during pregnancy. And yet, two out of three pregnant people are unvaccinated.

Having Covid during pregnancy is far more dangerous than if you weren’t pregnant. Covid puts birthing people at risk of being hospitalized, ending up on a ventilator, and having to deliver preterm.

And yet, fear of the unknown has kept two-thirds of pregnant people from getting the vaccine.

Kristina Wiltse, 31, is one of them. Wiltse lives with her partner and three kids in a trailer about 20 minutes from Shelton, on an island with no cell service. She said she doesn’t trust the Covid vaccine.

“I’ve had so many bad experience[s] with vaccines that have been fully tested,” she said. “This vaccine — I feel like it’s even a higher risk than other vaccines.”

She doesn’t believe it’s been tested enough, or that we know the long-term effects.

In August, Wiltse was 28 weeks pregnant with her fourth child when she started getting a cough and a sore throat. It was Covid.

After a few days, “I couldn’t get up and walk to the bathroom without losing my breath,” she said.

She decided to go to the hospital. She wanted to protect her baby.

“I could feel her moving around and everything, but even with movement, you can’t tell what the heartbeat is,” Wiltse said. “I couldn’t get air. I figured if I can’t get oxygen, then she’s not getting it.”

Wiltse drove to the nearest hospital and collapsed into a wheelchair. They spent the night trying to help her, but they couldn’t, so they airlifted her to the UW hospital in Montlake.

That helicopter ride in the bright morning light is the last thing Wiltse remembers until she woke up five days later.

“My hand immediately went down to my stomach, and I realized the baby wasn’t there,” she said. “And I pressed the call button on my bed and I had a nurse come in. And I pointed to my stomach.”

Wiltse couldn’t talk because she was intubated, and on an ECMO machine — a heart and lung machine that pumps blood out of the body, oxygenates it, and pumps it back in.

“He [the nurse] asked, ‘Are you in pain?’ And I shook my head no and I motioned for a pen, and he got me a whiteboard and a dry erase pen,” Wiltse said. “And I wrote down, ‘Where’s my baby?’”

The nurse told her that her daughter was in the newborn ICU and doing well.

Wiltse’s worries had come true: Neither she nor her baby had been getting enough oxygen. The doctors had to perform an emergency C-section, even though it was nearly three months before the baby’s due date.

Wiltse’s daughter was born severely underweight — only two pounds, six ounces — and couldn’t breathe or eat without help from machines.

Tanya Sorensen, a maternal-fetal physician at Swedish Hospital in Seattle, said her worst fears are unfolding.

“We’re seeing many, many more pregnant women getting infected and severely infected and in the ICU, and dying and having premature babies,” she said. “It feels a little desperate.”

In August, more pregnant people died of Covid in the U.S. than any other month since the beginning of the pandemic.

In late September, the Centers for Disease Control and Prevention released a health advisory once again urging pregnant people to get vaccinated.

Pregnant Asian-Americans have the highest vaccination rate, at 47 percent. Pregnant Black people have the lowest, at 17 percent.

Srilata Remala, founder and co-director of the Maternal Coalition, said there’s a lot of confusion. Her organization advocates for equitable and safe maternal health, with a focus on people of color.

Remala said some people are confused about which is more dangerous: Covid, or the Covid vaccine.

“I think they’re misunderstanding some of the stories of pregnant people dying of Covid versus of the vaccine,” she said.

She said she hopes that all the safety data and consistent messaging about how the vaccine protects the pregnant person, their baby, and their community can start to change perceptions.

Megan Felling, a midwife in Olympia, said getting her patients to accept the Covid vaccine has been a struggle. She tells them that data shows the vaccine is safe and effective during pregnancy, and that they can share their immunity with their baby, who will then be born with some protection against Covid.

“There are some of my clients who won’t — for whom that’s not compelling, for whom there’s just a real lack of trust in pharmaceuticals,” Felling said. “There’s a real fear that, oh, we’re going to find out years down the line that actually it wasn’t safe, and I will have made a choice to do something that put my baby at risk.” 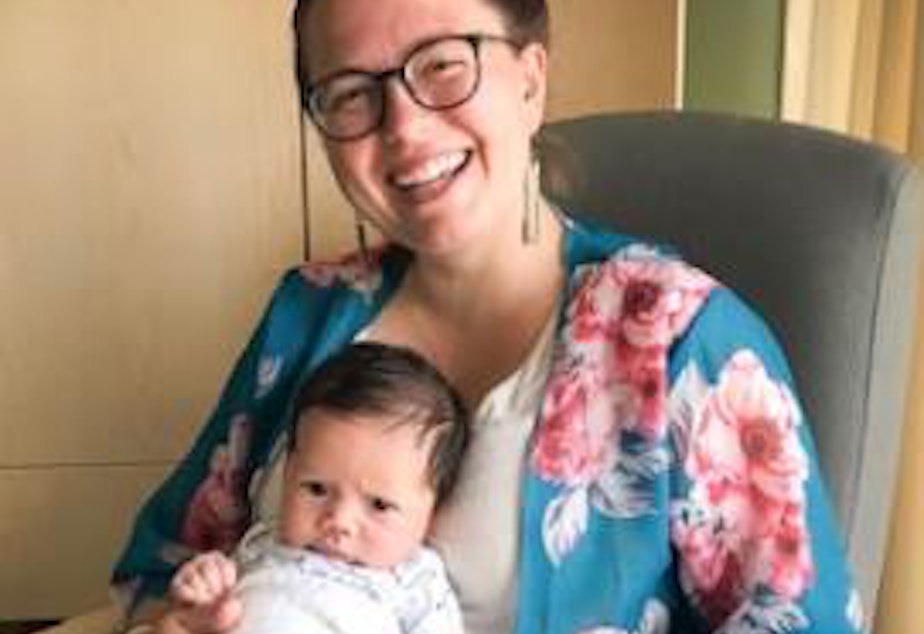 Kristina Wiltse said, if she had it to do over, she still wouldn’t get the vaccine.

“I’d rather go through that, because I was able to make it through that,” she said. “I don’t know that I’d be able to survive the vaccine just because of how my body reacts.”

Wiltse spent almost a week on an ECMO machine. Hardly anyone survives that, but she did. And, after a week or so on a ventilator, she was able to breathe on her own again.

Finally, Wiltse was disconnected from enough machines that nurses could wheel her through the hospital to go see her baby.

“I felt like she was just this little porcelain doll that I was gonna break because she was only two pounds six ounces,” she said.

“I told her everything about her brothers and her sister and her dad,” she said. She told her she’d be okay and that “she’s my little miracle baby, and I was never gonna leave her again.”

A few weeks later, Wiltse was discharged from the hospital. The ICU nurses in the hallway applauded as she left.

Wiltse drives the two hours to Seattle every few days to see her baby and drop off breast milk she’s pumped for her.

Her own recovery has been rough: Doctors have had to reopen her C-section scar twice to deal with infections and fluid. The hole in her throat where the ventilator tube entered her trachea is healing slowly, and she’s starting to get her strength back while fighting off postpartum depression.

Her daughter Aurora weighs more than three pounds now. Wiltse hopes to bring her home around her due date, in mid-November.