A Perth woman is trying to find her “guardian angel” who stayed by her side during a terrifying car crash when she was 24 weeks pregnant.

Chloe Cook was left trapped in her car while pregnant after another vehicle slammed into the driver’s side during a T-bone collision in August in Kenwick, in Perth’s south-eastern suburbs.

Ms Cook told 7NEWS.com.au while she was only stuck in the car for about 10 minutes, it was “the most terrifying ordeal of my life” that felt like it lasted more than an hour.

She says it was the kindness of a stranger that helped her stay calm and keep her baby safe.

“At first I thought I had broken my hip or pelvis and couldn’t move, but I was conscious the whole time so it was a terrifying experience,” she said.

The car after Chloe was cut from the wreckage. Credit: Supplied

“Once people realised I was trapped, this lady climbed into my passenger side and comforted me.

“She held my hand and covered me with her jacket and just kept talking to me so I could focus on staying calm.”

Ms Cook said having someone there to help her made “all the difference in the world”.

“When you’re pregnant you know you need to be calm and when you have someone taking some of the burden for you, it really helped me stay calm and keep my baby safe,” she said.

‘Someone was watching over me’

The crash left Ms Cook with four vertebrae fractures in her back, but she said she was lucky to escape with no spinal cord damage.

“I want to track her down and let her know that I’m OK and my baby boy is OK,” she said. 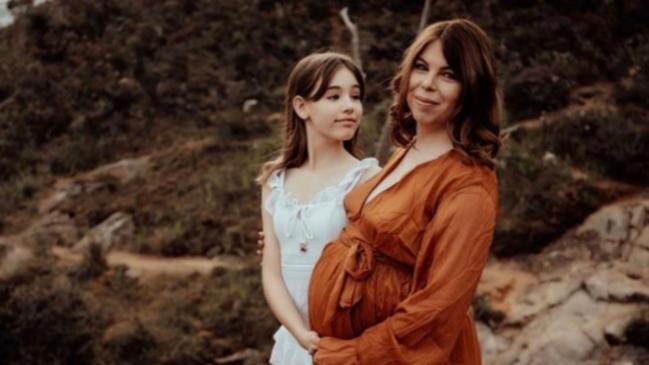 Chloe Cook is trying to find a mystery woman who helped her during a terrifying car crash ordeal. Credit: Supplied

“When we had the scans taken in the trauma ward they said they couldn’t even tell my baby was in accident, so it was like someone was watching over me.”

Ms Cook took her callout to social media, with a post sharing the story of her ordeal and her hunt for her guardian angel reaching more than 700 people.

She was able to give birth to a healthy baby boy, Teddington — who turns six weeks old on Friday — and said her family deeply appreciated the act of kindness.

“I can’t even remember what she looks like, but I want her to know how thankful we are and that what she did made a difference that day,” Ms Cook said.