With rapid economic growth and urbanisation in Malaysia over the past few decades, there is an increasing trend for women to delay marriage and childbearing, as they now enjoy improved educational and employment opportunities.

However, with older maternal age, there is an increasing likelihood of a woman’s eggs having an extra chromosome copy, which in turn increases the risks of spontaneous birth defects in their offspring.

Although such genetic defects in foetuses can be accurately diagnosed in pregnant women by non-invasive prenatal testing (NIPT), they have to face the agonising dilemma of whether or not to abort their unborn child, upon getting a positive diagnosis.

To avoid the moral dilemma and emotional trauma of abortion, it might be preferable for older women undergoing IVF (in vitro fertilisation) to screen their embryos for genetic abnormalities, before transferring them into their wombs.

Typically, PGS (PGT-A) increases the total IVF medical fees by around 40 to 50 per cent, so it would a lucrative business model for fertility clinics to encourage more patients to add-on this expensive procedure to their IVF treatment.

Nevertheless, patients must be wary of the aggressive sales pitch and marketing gimmicks that could be used on them.

One example is how the concept of relative risk can be misrepresented to patients to play on their fears of birth defects.

Hence, through a sly manipulation of words and figures, the risks of genetic defects can be ‘exaggerated’ to patients who are unfamiliar with medical statistics.

PGS (PGT-A) is also highly invasive, as it involve drilling a hole through the embryo shell (Zona Pellucida) and extracting cells from the embryo for genetic testing (biopsy), which is potentially harmful, and can impair it’s development.

Many experts have pointed out that studies claiming no ill effects on embryos are often based on PGS (PGT-A) of excellent quality, healthy, robust embryos rather than more ‘delicate’ embryos that might suffer more.

Hence, if an IVF patient has just one or two embryos, it might not be worth taking the risk. No matter how well-trained is the lab staff (embryologist) performing this procedure, there is still a risk of human error.

The more busy the IVF lab is, the greater the risk of human error, as lab staff are under pressure to complete procedures as fast as possible.

Another deficiency of PGS (PGT-A) is that it involves extracting and sampling cells from the outer embryo layer (Trophectoderm, TE) that gives rise to the placenta and umbilical cord.

This is not representative of the inner embryo layer (Inner Cell Mass, ICM) that goes on to form the actual embryo proper, which gives rise to the baby. 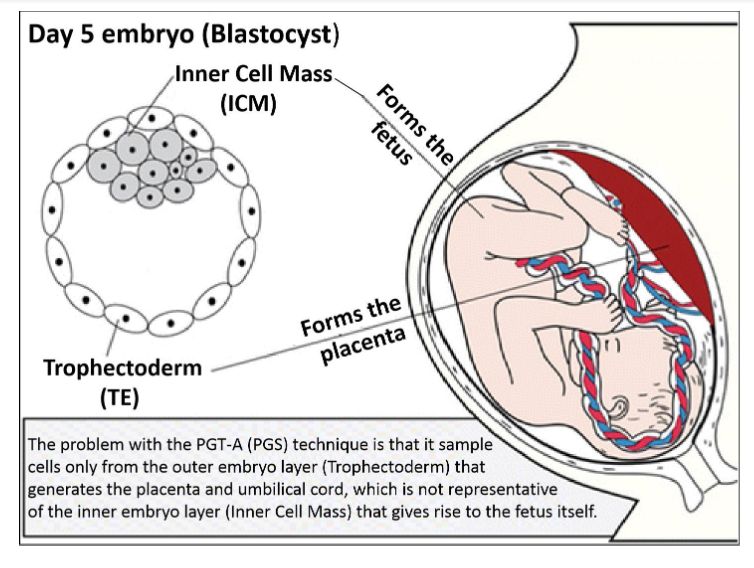 Mosaic embryos, which are embryos with a mixture of genetically normal and abnormal cells occur quite frequently and commonly among women undergoing IVF.

Genetic testing often leads to the misdiagnosis and discarding of mosaic embryos, which have been shown to be capable of giving rise to a normal and healthy baby.

There is scientific evidence that mosaic embryos are able to “self-correct”, which increases the chances of normal birth. This “self-correction” mechanism involve pushing out the genetically abnormal cells into the outer embryo layer, which gives rise to the placenta and umbilical cord.

Older women with low ovarian reserves have much fewer embryos during IVF. Therefore, excluding or discarding of mosaic embryos that can potentially give rise to a normal baby, would in fact substantially reduce their chances of IVF success. Some older women may have no embryos left to transfer after genetic testing.

Indeed, in neighbouring Singapore, PGS (PGT-A) is still not approved as mainstream clinical treatment, due to ambiguous results and a high attrition rate of 72 per cent in local clinical trials, as reported by the Singapore Ministry of Health in 2021.

Recently, a much cheaper and less invasive alternative to PGS (PGT-A) was announced, with groundbreaking results from an international study published in the reputable Human Reproduction journal.

Interestingly, Alpha IVF in Malaysia was a major collaborative partner in the development of this new reproductive technology platform, which is non-invasive, low-cost, and provides results instantly, and therefore very much preferable to the expensive, time-consuming and invasive PGS (PGT-A) technique.

According to Presagen Chief Medical Science Officer Dr Sonya Diakiw,  this AI screening technique based on microscopy images alone, may not be as accurate as PGS (PGT-A) itself, which involves actual DNA sequencing.

Nevertheless, a relatively high accuracy rate of 77.4 per cent was reported in Human Reproduction.

This does not compare too badly with results from the PGS (PGT-A) technique, which themselves can be variable, due to their small sampling size.

Typically, PGS (PGT-A) only tests around five cells from a total of around 200 cells in a blastocyst-stage embryo, so it is not always representative of the entire embryo.

Hence, there is a risk of misdiagnosis of false positive and false negatives, particularly with mosaic embryos.

By contrast, the Life Whisperer Genetics AI algorithm is a whole-embryo assessment of genetic integrity that does not require any invasive procedures, which can be used to prioritise embryos for use in IVF procedures.

Because instantaneous results can be obtained through AI screening, unlike time-consuming PGS (PGT-A) that take at least a few weeks, there is no obligatory requirement to freeze the entire batch of tested IVF embryos, while waiting for the test results.

This could be advantageous for some patients with a few weak embryos that maybe harmed by the freeze-thaw process.

However, a current deficiency of this new technology platform is its inability to reveal the sex of the embryo, unlike conventional genetic testing with PGS (PGT-A).

It is possible that this might be remedied in the near future, with the development of new AI algorithms that could identify the sex of IVF embryos with some degree of accuracy with microscopy imaging.

Given the much lower costs and reduced risks of harming the embryo, albeit slightly less accuracy and inability to carry out sex selection, it maybe more worthwhile and cost-efficient for patients to do AI-based screening of IVF embryos, rather than actual genetic testing with PGS (PGT-A).

At the end of the day, it is up to patients to decide on the technique will give them better value for their hard-earned money, based on their individual risk-cost-benefit analysis.