Some Alberta physicians are urging the province to begin offering third doses of COVID-19 vaccine as soon as possible to pregnant Albertans, who are at higher risk of complications.

The Alberta Advisory Committee on Immunization has issued a “strong clinical recommendation” that people with health conditions increasing their risk of severe outcomes, including pregnancy, and all people over the age of 40 get booster shots.

That’s in addition to the general recommendation that anyone 18 and over be offered a third dose at least six months after their second.

But the Alberta government is rolling out the latest phase of booster doses by age, with those 60 and up currently eligible.

In a letter to physicians on Dec. 1, the day the province announced plans to expand boosters to people 18 and older, Alberta’s chief medical officer of health, Dr. Deena Hinshaw, outlined the new recommendations.

“Having worked through this last fall when we saw how devastating delta was on our pregnant population, I just really want to see this prioritized as soon as possible,” said Dr. Stephanie Cooper, an obstetrician specializing in high risk pregnancies at Calgary’s Foothills Medical Centre.

While she is pleased the committee has included pregnancy in the list of high-risk health conditions, Cooper is worried about her patients, some of whom already are or will soon be six months past their second doses and therefore eligible for their booster shot.

“Is a woman who is 41 years old and pregnant with a comorbidity at higher risk than a 60-year-old person? And I would say ‘yes,'” Cooper said.

“I feel like the pregnant population is not being recognized with the current rollout of the booster doses.”

No plans to prioritize

The Alberta government does not intend to prioritize people with chronic health conditions, including pregnancy.

In a statement emailed to CBC News, an Alberta Health spokesperson reiterated the government’s plan to continue rolling out third doses by age groups.

“We know that age is still the greatest risk factor for severe outcomes from COVID-19, which is why Alberta is opening appointments for boosters based on age groups,” said spokesperson Lisa Glover.

“We have enough doses to provide boosters starting with individuals 60 years of age and older, and additional age groups will be opened as soon as possible. As we’ve done before, we’ll open up as quickly as we receive supply.”

Glover said pregnant Albertans can get their booster doses when their age cohort opens, or if they’re included in previously announced groups including all First Nations, Métis, Inuit people 18 and over, those with very specific immunocompromising conditions,  AstraZeneca or Janssen recipients, and front-line health-care workers who had their first and second doses less than eight weeks apart.

Dr. Eliana Castillo, a clinical associate professor of obstetrics and gynecology at the University of Calgary, is very concerned about the ongoing risks facing her pregnant patients.

“Being pregnant when you get your COVID-19 infection increases your risk of ICU admission, death and preterm delivery, so having your baby born prematurely.… With the delta variant, those risks have become even higher,” she said.

And while the hospitalization numbers have come down from the peak of Alberta’s fourth wave, Castillo is still seeing otherwise healthy, pregnant women hospitalized and placed on the highest level of life support.

“All of us who work with pregnant individuals would like to have seen it recommended sooner, not only in Alberta, actually in Canada,” she said.

But Castillo said there are far more pregnant women who have not had their first or second doses than those who are eligible for their third. 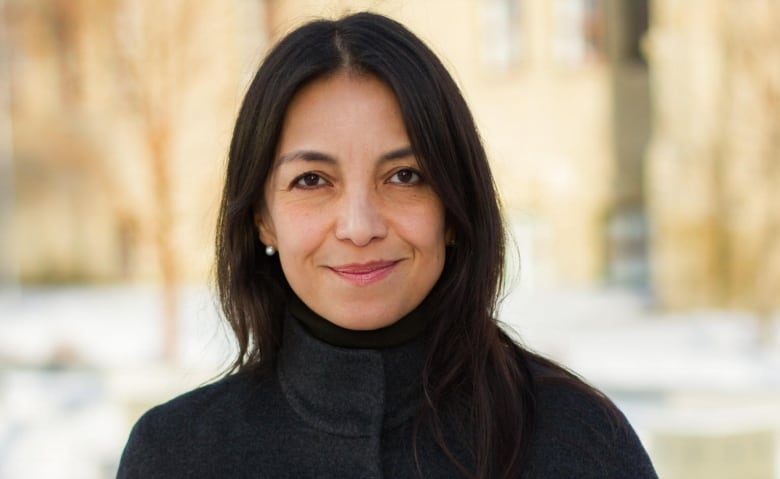 Dr. Eliana Castillo is worried about her pregnant patients and is urging them and their families to take extra precautions over the holidays. (Lisa Enman Photography)

With so many unknowns about the severity of disease caused by the new omicron variant and with delta still circulating, Castillo hopes pregnant Albertans and their families will get their first and second doses and take extra precautions — above the current public health restrictions — during the holiday season.

“In the face of uncertainty, I think being cautious will serve those pregnant moms and their loved ones well,” said Castillo.

“We are not out of the woods, and COVID-19 remains a very serious reality for many families in Alberta who are pregnant or have recently had a baby.”