A startled woman went into labour 24 hours after learning she was pregnant.

Molly Gilbert, who claims she had “no symptoms at all, no sickness or anything”, found out she was pregnant on Wednesday, September 7, went into labour the following day and gave birth in the early hours of Friday, September 9.

The 25-year-old, from Trowell, Nottinghamshire, was completely unprepared for the birth of her baby Beau, who is now almost two weeks old.

Molly, who gave birth at the Royal Derby Hospital, had been visiting the doctor over the last few months as she felt something was not right.

The operations support worker told Nottinghamshire Live: “I’ve been going back and forth to the doctor since the end of March as my weight has been really up and down, it has been for years, but it was noticeably different these last few months.

“I was being tested for lymphedema and lipoedema because they just thought it was water retention or something like that.

“They checked diabetes and thyroids and things like that but said it wasn’t that.

“Then it was a bit of a ‘we don’t really know what’s wrong with you so we’ll just have to leave it situation’, so I was just really trying to say that there is definitely something wrong with me, I don’t feel right.”

Molly went for further blood tests on Monday, September 5, and received the results two days later which was that she had low iron and a problem with her liver.

She said: “I was like well at least I’ve got kind of an answer to what’s going on, but then an hour later they rang me back and said actually we’ve had the rest of the blood results, and you’re pregnant.

“I said no I’m really not I can’t be, and if I am I’m like six months. I split up with my boyfriend in March, so I was like there’s no chance, no, not a chance.”

Due to how far along Molly calculated she must be, the doctors encouraged her to quickly see a midwife.

She went home to tell her mum, and said: “Right, at least we have a few weeks to kind of plan what’s going on, we have to get sorted.

“I went to work as normal the next day, my mum was around the corner so I went to meet her on my lunch at Costco, and my waters broke.

“My mum rang an ambulance and they took me in.

“They wanted to scan me as we had no idea how far gone I was, no idea about anything.

“They scanned me and they actually laughed, they were like you’re 39 weeks and 6 days.

“You’re having a boy and he’s coming now. I was like oh no, this can’t be happening.” 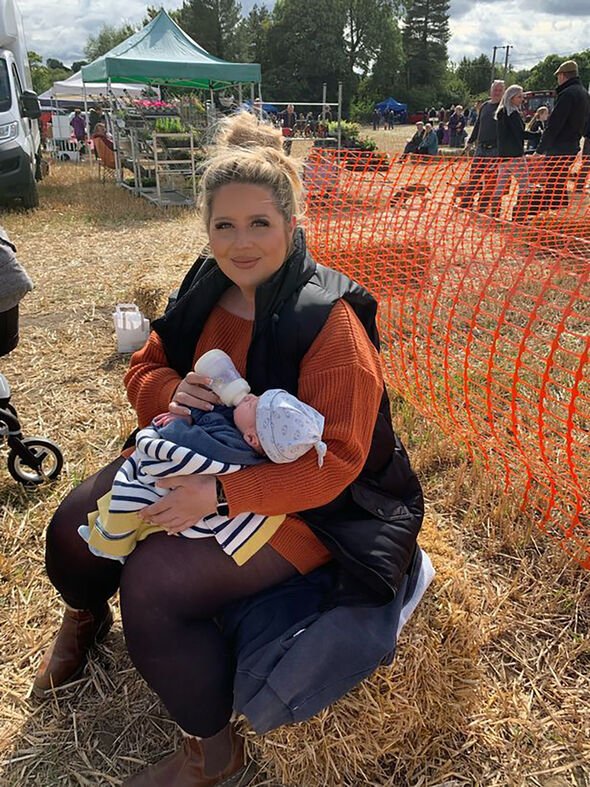 Molly has described the whole experience as “crazy.”

When asked how she prepared after having no time to plan, she said: “I think it’s been quite good though as I’ve not had time to panic or for anyone to tell me horror stories or anything, so it’s been quite nice.

“I’ve been really lucky, I’ve had so many people wanting to give me stuff thinking I won’t have anything.

“A lot of people have been round and brought me stuff and my parents went and got me a pram, so it’s not like I came home to nothing.

“I had a C-section so I was in hospital for a few days, so had a few days to sort things at home. It’s been crazy.”

Molly’s dad, Vince Gilbert, 66, is frustrated that his daughter’s doctors were unable to diagnose her pregnancy despite multiple tests and appointments, as it left the family concerned over Molly’s health for months.

However, he is pleased with the healthy arrival of his grandson Beau despite the “shock.”

Vince said: “He’s absolutely stunning, to say nobody knew he was there, he has turned out very well. We are over the moon.”

Molly is thrilled with the arrival of her son and said “he’s so chilled out, he’s very good.”

When asked if pregnancy ever crossed her mind over the last few months when she wasn’t feeling herself, Molly said: “No not at all, it never crossed my mind, if they asked me I would have said no as I just didn’t think it was possible.

“I had no symptoms at all, no sickness or anything, it was just kind of like weight gain but it wasn’t like a bump.

“I didn’t have any movement, my placenta was at the front acting like a cushion so I didn’t even feel him.”

Despite splitting with her ex in March, Molly said: “He was quite calm when I first rang, I expected him to be like what do you mean.

Molly lives with her parents, and so Beau is living with his grandparents.

The 65-year-old explained: “I’ve already got four grandchildren, but he’s living with me so it’s like a totally different thing.

“I used to say it’s lovely having grandkids as you can say bye, but I won’t be doing that with this one.

“When I get up in the morning I still can’t believe it, but I can go get him up and get a cuddle out of him, it’s lovely.

“If I had had time to think about it I would have been thinking oh god she won’t cope, but this has just come like a miracle.”

Margaret says she “shocked” at what an “amazing” mum Molly has become.

She said: “It’s amazing as I don’t think she ever would have planned one, but he seems to be like heaven sent.”