The Adolescent and Young Adult (AYA) Treatment Program at the Hyundai Cancer Institute at CHOC saved 27-year-old Vincent’s life — in more ways than one.

The AYA Oncology child life program is one of the only child life programs in the country geared toward teen and young adult cancer patients. Child life’s goal is to normalize the hospital experience for patients and their families, so they can feel at ease and focus on feeling better. For young adults with cancer, their lives — that should be filled with high school or college classes, dating, and hanging out with friends — are interrupted by their diagnosis. The risk for depression is high in these patients, which can impact their treatment.

Vincent was one such patient who experienced depression as part of his cancer treatment and recovery.

In November 2015, when Vincent was 20 years old, he began experiencing frequent headaches and dizziness. As a college student, he brushed off his symptoms, assuming they were caused by him not managing stress well. But after months of continued headaches and dizziness, one night in May 2016, it became unbearable. Vincent asked his mother to take him to the local emergency department.

There, an MRI found that Vincent had a golf ball-size tumor in the middle of his brain. Two weeks later, Vincent was transferred to AYA oncology treatment program at CHOC for aggressive treatment.

Vincent with friends at the 2022 CHOC Oncology Patient Ball presented by the J. Willard and Alice S. Marriott Foundation

A brain biopsy determined that Vincent had a germinoma, a type of germ cell tumor (or a growth of cells that form from reproductive cells) that is most often found in the brain.

Fortunately, Vincent’s cancer was highly treatable with chemotherapy and radiation. Vincent stayed at CHOC for six months — receiving five rounds of chemotherapy and one month of radiation. During his time at CHOC Hospital in Orange, Vincent just stayed in his room and kept to himself. Despite encouragement from CHOC providers and staff to meet other young adult cancer patients and participate in activities, Vincent refused.

Since Vincent knew that his cancer was treatable, he wanted to be left alone to get through his treatment as fast as possible.

In December 2016, Vincent was declared cancer free and discharged from CHOC.

Even though Vincent was in remission, the following year was a dark one.

“I lost my identity,” says Vincent, “I didn’t know whether or not I was a cancer patient anymore. I was in remission, but it didn’t feel like it because every headache felt like I had cancer again.”

Although he had good support system around him, Vincent felt like no one could truly understand how he was feeling.

“Everyone could sympathize, but no one could empathize,” he says.

Over the course of that year, Vincent felt so scared, alone and depressed that he considered taking his own life.

Instead, Vincent finally decided to reach out to the AYA child life program at CHOC to see if he could get involved and attend events. He immediately received a resounding “Yes!” from Kara Noskoff, CHOC’s patient and family experience program specialist and former AYA child life specialist.

Vincent soon attended his first event – picking out a free-of-charge tuxedo to wear for the upcoming CHOC Oncology Patient Ball presented by the J. Willard and Alice S. Marriott Foundation. The CHOC Oncology Patient Ball is an annual event that gives young adult patients the opportunity to enjoy an important life event that they may have missed at their own schools because of cancer treatment.

As soon as Vincent walked into the tuxedo event, he was welcomed by three young adults who were on their own cancer journeys. They completely understood what Vincent had gone through, and he felt right at home. 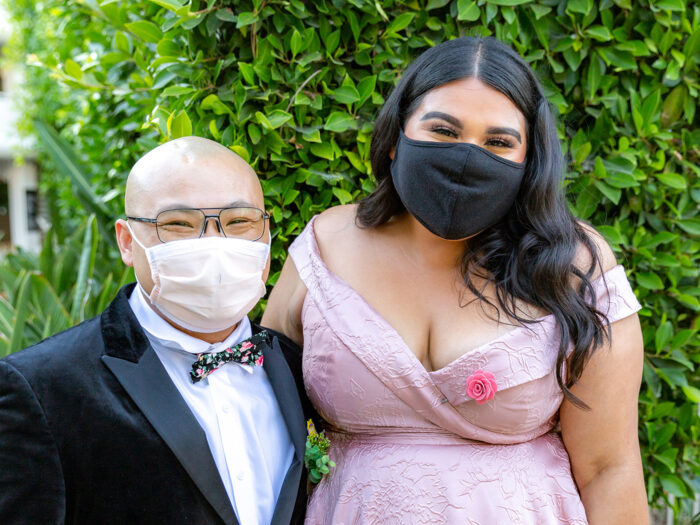 Vincent and his date at the oncology ball

“I missed out on so much that year I spent trying to figure it all out on my own,” says Vincent.

On July 16, 2022, Vincent attended his fourth. The oncology ball was held at a hotel in Irvine, Calif and the theme was “The Enchanted Ball.” It featured activities like horse-pulled carriage rides, letter brush artists and custom poetry, dinner, dessert and dancing.

The oncology ball is a safe space for attendees to take a breath and not worry about what comes after it, says Vincent. It’s an opportunity to let loose, express yourself and try different things.

“It’s the only place I’ll ever dance,” he says. “The energy of the oncology ball just brings it out of me, and I know I can express myself without judgment. By the end of it, my feet hurt and my back aches, but I love it because it means I put it all out there.”

Highlights from Vincent’s four balls include dancing, hanging out with friends, rapping with Jack Black and meeting Selena Gomez, just a few of the surprise celebrity guests who have popped by through the years.

In addition to the oncology ball, the AYA oncology program at CHOC hosts many different events and hangouts for young adult cancer patients, survivors and their family members.

Advocating for young adults with cancer

Vincent’s AYA oncology program experience not only saved his life, but it also gave him a new perspective. The thing about cancer, says Vincent, is that death is unfortunately a big aspect of it.

“You never know how you or anyone is going to react to their treatment,” he says. “We have lost some people from the AYA oncology program. Over the years, I think I’ve developed a pretty good resilience, being more grateful for everything around me and all the people that are in my life. I just try to make the most out of life and be kind to myself and to others.” Vincent now serves as a leader in CHOC’s AYA oncology program, where he helps organize events for other young adults and encourages them to get involved. Pulling from his own experience, Vincent is passionate about letting others know that they aren’t alone in their cancer journeys. With the AYA oncology program, patients have access to a loving support system that will be there for whatever they need — whether it’s someone to visit their room, talk to or play games with.

Every September, advocacy organizations, healthcare institutions, patients, and families raise awareness for childhood cancer. For Vincent, this month is personal.

Because of his gratitude for the loving, expert care he received at CHOC, he advocates for all young adults to have access to such care. Vincent has gotten the chance to meet with other AYA programs in Southern California, as well as other young adult cancer advocacy organizations.

“Young adults are kind of a missed demographic when it comes to cancer,” says Vincent. “It’s because some young adults don’t know that there are providers and treatments out there just for them. There’s a lot of work being put into this demographic, and I hope one day that excellent care like CHOC’s will be standardized throughout all hospitals for young adults. That’s what they deserve.”

To other young adults who might be going through a cancer diagnosis or treatment, Vincent advises them to keep an open mind. It’s hard though, Vincent acknowledges, because cancer treatment can make someone feel vulnerable. But being open to receiving love and support from other young adults, family and friends can hopefully make a bad experience better, he says.

When reflecting on his own cancer experience, Vincent realizes how far he’s come since isolating himself in his room at CHOC.

“At first, I didn’t want anything to do with the AYA oncology program because I was afraid that if I put my heart in it and dove in, it would hurt me later on,” he says. “And there have been losses that hurt a lot, but there has also been so much love. And although nothing can balance out losing friends to cancer, the love gives me hope that it’s worth it.”

For Vincent, the process of going through cancer treatment and reconciling his remission has been long, but the people he’s met through his experience with the AYA oncology program at CHOC has made him who he is today.

“I’m just so grateful and blessed for it all,” Vincent says. CHOC Hospital was named one of the nation’s best children’s hospitals by U.S. News & World Report in its 2022-23 Best Children’s Hospitals rankings and ranked in the cancer specialty.